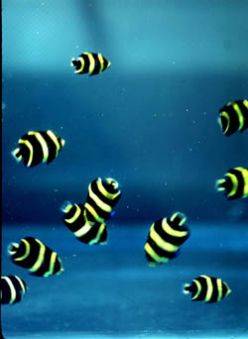 Want to know more about the French Angelfish? Read our guide for facts and info on this popular aquarium fish…

No aquarium collection is complete without the French angelfish. Popularly known as the French Angel, this unique breed has become a hot favorite all over the world not only for the aquarium but also as food fish. It is more of a food fish in the regions of Thailand and Singapore whereas the rest of the world takes it as a valuable addition to an aquarium.

Many people tend to confuse the French angelfish with another species that resembles it known as the Grey Angel.

The seas of western and eastern Atlantic are home to the French angelfish. It is found in the coastal waters stretching all the way from Florida to the Bahamas and even down to the Caribbean Sea on the Western front. On the eastern side, West Africa and Cape Verde Island is where this species is found.

The French angelfish thrives in shallow reef environments. Typically it remains in the upper 14m perimeter. This however does not mean they do not have the capability to descend into deeper waters. In fact at an average the French angelfish can go down to 100m. Coral reefs situated near the sea fans and rocky broken bottoms are typical places where you can expect to find the French angelfish. This species can also be found on grassy flats.

You will never be able to find a French angelfish alone as this breed lives, travels and even hunts in pairs. It is believed that French angelfish mate for life. They have a slow life during the day where they browse through the waters in search of their daily dose of nutrition. Come night and you will find them seeking shelter. French angelfish have a designated hiding spot where they return to every evening and are regarded as being highly territorial creatures.

The largest that a particular specimen of the French angelfish has ever been measured is a staggering 16.2 inches. The French angelfish is born as a dark brown black fish and has yellow bands circling around its head and body as decoration. As the fish grows older the yellow bands seem to fade away. However one yellow band remains throughout the life of the fish which is situated close to the outer base of its fins. The adult angelfish has yellow rims on its now blackened scales. The adult develops a light blue shade on its face leaving white chains and mouth white in color giving it a totally unique and very appealing appearance.

The fact that the French angelfish is a relatively hardy species enables it to easily adapt to aquarium life. It can also tolerate an exceptionally wide range of salinity making it easy to care for. The best way to keep these fish is to keep them in pairs. Ideally you would want to set them up with a live rock in order to provide them with their much-needed hiding spots.

France 0 58
Have you always wanted to experiment with the French twist hairstyle? Did you always

France 0 13
Are you going on holiday to France? Do you want to see the best

France 0 6
Are you looking to rent a river boat in France? Perhaps you’d like to

Chinese Calligraphy Symbols
China
Discover the brilliance of Chinese calligraphy symbols, their history and their usage in today’s
0 11278

Chinese Family Symbols
China
The Chinese symbols for family occupy a special place in their culture. Find out
0 3959

Rare Argentina Stamps
Argentina
Interested in rare Argentinian stamps? Want to know which stamps from Argentina are most
0 3346

Ancient China Social Classes
China
Interested in the social structure of ancient Chinese? Want to know more about the
0 2418