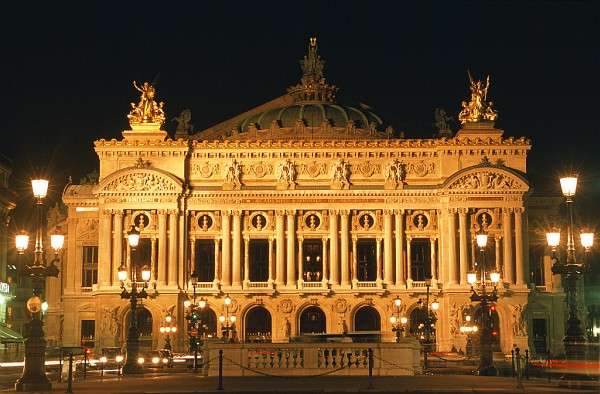 Want to learn more about the opera Garnier Paris? Read on for facts and info on the most famous Opera House in Paris…

The Opera Garnier Paris is perhaps the most well-known building in all of France. Popularly known as the Paris Opera, this building is regarded as being the largest theater and opera house in the world.

It was established in 1875 and began hosting shows on 5th January in the same year. Charles Garnier is credited for producing the unique cavernous building. The wondrous building took a total of 14 years to reach its completion. This was largely because it’s construction was disturbed by major events like the Franco-Prussian war along with the fire that broke out inside the building in 1873.

Although the Paris Opera House has now established itself as the center of opera and theater it did not receive a warm welcome by the public during its initial years. In fact many critics spoke against the Garnier Paris. The architecture bore resemblance to the second Empire grandiosity which made many people feel as though it was over the top. The architect was criticized for the particular design that he had created but he was adamant on defending what he had created.

While many people did not like the gaudy architecture of the opera house the truth was that it was very well-suited to the art form. This is because opera performances are based on extravagant sets, florid music and out-of-the-box costumes. Not to forget the oversized egos of the singer performers as well as the wealthy opera patrons. The nature of opera at that time was perfectly reflected in the unique architecture of the building.

Opera performances are no longer held in this historical building. Rather it has become a center for ballet and modern dance. The modern Opera Bastille is where the grand opera is held today instead of this building. There are many events, concerts and performances held regularly at the opera Garnier. If you happen to be visiting Paris when the Paris Opera House is not booked for some sort of an event then you can take a guided tour of the building. The local authorities have exhibited impressive displays of set models, costumes and drawings used in the opera house over the passage of time. This provides for an interesting experience for tourists. The building also features a beautiful man-made lake beneath its surface.

The Paris Opera House is open from 10 AM to 5 PM throughout the year for tourists to see. It is however closed during special performances when it has been booked. In case you are planning on attending a performance in the Paris Garnier then make sure you reach the location beforehand because the gates close at least half an hour before the performance kicks off.
On a normal day it will cost you about eight euros to take a tour of the Paris Opera House. With the ticket in your hand you will be able to explore the auditorium, lobbies, foyers and museum.