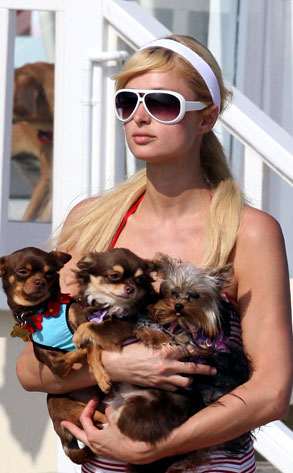 Want to learn more about Paris Hilton’s Chihuahua? Read on for facts and info on the little fashion mutt adopted by Paris Hilton…

Paris Hilton an American socialite and model belongs to the famous Hilton family of America. She is very fond of small dogs especially her Chihuahua named Tinkerbell.

Her Chihuahua is referred to as an accessory dog because she is always carrying it in her purse or her hands at functions or at social events. In fact the television reality show called The Simple Life in which she stars with Nicole Richie also had Tinkerbell featuring in all seasons. Paris Hilton’s Chihuahua Tinkerbell has also authored a memoir named The Tinkerbell Hilton Diaries.

In 2004 Paris Hilton’s apartment was broken into and robbed and Tinkerbell went missing. Paris posted a $5000 reward for the safe return of her Chihuahua. The dog was found after six days and by the end of the year was spotted with Paris Hilton at various events.

Her fondness for dogs does not stop at Tinkerbell, as she acquired a male Chihuahua from Los Angeles at a pet shop called Pets of Bel Air. In fact she loves dogs so much that she started a clothing line for the dogs and named it Little Lily by Paris Hilton and some of the proceeds from the sales go to animal rescue benefit.

Too Many Dogs Get Paris in Trouble!

In fact she was under investigation after admitting that she owned 17 dogs. According to US law you cannot have more than three dogs at one residence if you are not a dog breeder.

Paris Hilton owns approximately 17 dogs and startled Ellen DeGeneres on the show when she admitted this fact. She said her laziness has resulted in her house becoming a personalized Paris Hilton Chihuahua breeding colony!

In fact the animal shelter bosses in Santa Barbara have disallowed anyone under 21 to adopt a small puppy because women will follow Paris Hilton’s Chihuahua dressed dog fashion trend and discard their full-grown dogs in favor of smaller ones that look more fashionable as they are tiny and cute.

Unfortunately, large dogs do not fit in a tiny handbag which is the trend that Paris Hilton’s Chihuahua is all about. She has earned the scorn of many animal lovers including Cihuahua Club of America head Lynnie Bunten who was quoted in the National Enquirer saying that Chihuahuas are not a fashion accessory and people often mistake them for such, and then abandon the dog after realizing their mistake.

Another celebrity rocker Fred Durst shopped for a Chihuahua for his son recently. Hilton is quoted to have said that she missed her pets while she was in jail and unfortunately had to give up her kinkajou because it’s an exotic species and you’re not allowed to own it in America.

As far as Paris Hilton Chihuahua is concerned, the dog had a big say in choosing her boyfriends. She believes that if the dog likes the person then he can be considered a worthy suitor.