France is the third largest country in Europe after Russia and Ukraine. It may come as a surprise then that the population of mainland France is only 61 million or 64 million including all of France’s overseas territories. Approximately 20% of the population of France lives in Paris and the metropolitan area surrounding Paris. 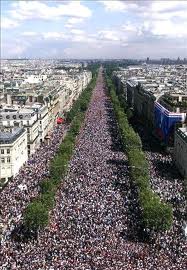 Like most industrialized countries, France has seen a steady decline in its rural population for over a century with people moving to the big cities which are the industrial centers and powerhouses of the economy of France.

However, recent decades have seen population numbers dwindle particularly fast in the mountainous areas of France. This has primarily been due to a lack of economic infrastructure in these areas making life unsustainable for many.

France has a long history of immigrant populations who have come over in successive waves sine the 19th century. The first immigrants to arrive in France came from 1850 until the start of World War One. Over four million immigrants moved to France during this time mainly from other European countries such as Spain, Italy, Russia and Poland as well as a sizeable Armenian immigrant population.

After the First World War, France again had to accept a further three million immigrants who were desperately needed to fill the manpower shortage left by all the deaths incurred during the war.  The most recent wave of immigrants to France came after World War Two when France’s unrivaled period of economic boom needed yet more manpower to sustain it.

Many of the immigrants who came in the 1950’s onwards were from France’s former colonies in North and Sub-Saharan Africa.  In addition, with the collapse of the French Empire up to one million ethnic French people, who had formerly lived in the colonies, returned to France.