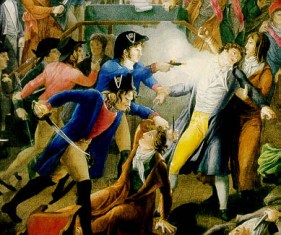 The Thermidorian Reaction was a revolting move against the Reign of Terror in France and brought an end to the revolutionary vehemence of the French Revolution. Read our guide for more facts and information…

Feudal oppression and fiscal laxity led to the French Revolution during 1789-1799. The Thermidorian Reaction began on 9 Thermidor, year II (July 27, 1794) of the Revolution, following the overthrow and execution of Maximilien Robespierre, who took control of France shortly after the formation of the National Assembly. It set off a period of reconstruction of the government and the formation of the 1795 constitution. Eventually, the Directory, which was formed to govern executive responsibilities, superseded the National Convention.

The Reign of Terror

Owing to the financial slump in the French treasury in the 1700s, King Louis XVI convened the Estates-General in 1789, in order to find a tax solution. Estates-General was an assembly of three estates namely, the clergy, the nobility and the general French public, wherein the third was much larger than the first two. As the clergy and nobility were exempt from taxes, it was not possible to attain a solution, and the Third Estate, taking advantage of the disparity, established itself as a sovereign body called the National Assembly. Its revolutionary spirit spurred France, with peasants revolting against feudal contracts. The rural attacks called as the ‘Great Fear’ resulted in the establishment of a better judicial code for the French.

However, soon after the National Assembly drafted a constitution, a rift in the assembly led to the formation of the revolutionary Jacobins and moderate Girondins. France’s revolutionary spirit caused fear in the neighbouring countries, which insisted that Louis XVI be returned to throne.  The National Convention declared France as a republic and executed Louis XVI in 1793. Wars with Austria and Prussia went unfavourably for France, which led foreign forces to enter the French territory. Eventually, the citizens rose against the Girondin-led convention, giving control to the Jacobins, led by Robespierre. However, Robespierre, wary of counter-revolutionary effects, initiated a Reign of Terror during 1793-1794. Over 15,000 people were executed under the reign.

Principals of the White Terror

In due course, as foreign invaders were eradicated by the French army and the economy attained stabilization, Robespierre had no justification for his actions, due to which, he was arrested and executed in July 1794. His expulsion set off the Thermidorian Reaction, marking the end of the Reign of Terror. In 1795, the ‘White Terror’ fumed in which, the bourgeois moderates judged the Jacobins. Massacres of imprisoned leaders of the ‘Terror’ took place. The executions were carried out due to political differences and to revenge against the Jacobins.

Leaders of the Thermidor

Some of the leaders of the Thermidor include Jean-Lambert Tallien, Paul Barras and Joseph Fouche. They removed the Jacobin clubs and called the surviving Girondin leaders to resume their positions in the Convention. Terror practitioners were allowed to defend their records, allowing some to resume leadership, while some were exiled to South America. They scattered the Revolutionary Tribunal and took away the independent authority of the Public Safety and General Security. Further, they took steps to restore Catholicism and allow priests to conduct Mass.

Formation of the Directory

The events of the Thermidor formed a turning point in the revolution, as the subsequent regime was less rigid and allowed for more individual freedom, particularly religious liberty. A new constitution was drafted including provision for an Electoral College and bicameral legislature. It established the Five Hundred and the Elders as legislative councils to choose and nominate the persons who headed the Directory. Though economic policies led to inflation and shortage of food, the Directory implemented dynamic economic principles to ease the situation. The old currency Livre got a new name called franc.

The Directory had a tough time in balancing between the restoration of monarchy and reverting to the revolutionary Jacobin principles. Frequent clashes between the directors and legislative councils caused politicians to manoeuvre the assistance of the successful army. The army, led by general Napoleon Bonaparte, had gained prominence and contributed to the prestige of the National Convention. Napoleon led a coup d’état against the Directory in 1799 and established a dictatorship.

Many historians refer to the term Thermidor as a stage in a revolution, where the extremist regime is supplanted by a more conservative one, with the possibility of the political conditions returning to the pre-revolutionary situation. For instance, Stalin’s rise to power in the Soviet Union is referred to as a Soviet Thermidor.