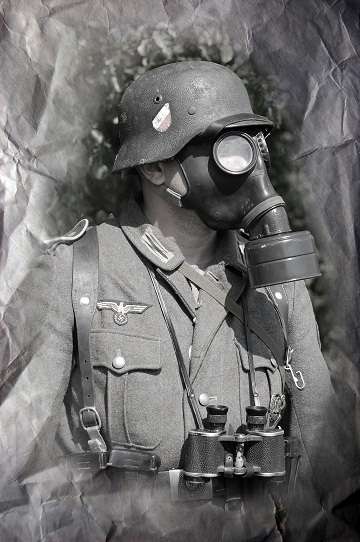 In the past decade there has been an increasing interest in World War II German relic helmets. The German relic helmets were found in old burial sites which were excavated around the battlefields, abandoned in bunkers, in rusted hulk’s with no insignia or paint on them, and finally those helmets which had been damaged in combat.

In a majority of the situations these helmets are in shabby condition and much more damaged than common helmets. At best the helmets are incomplete, damaged and rusty when found in a good condition. Some of them don’t even look like the helmets that they used to be. However, it still makes one wonder why there is interest in collecting the item. Since the original and untouched helmets are not available or affordable within the collectors market, it has led to an interest in the next best thing – the German relic helmet.

The high qualities of original helmets which have survived post war are few and restricted to prime collectors. There are also many fakes which are touted as un-tampered in the market and many consumers have lost thousands of dollars before realizing that they have got a fake replica. Therefore, by investing in a worn out relic at least they are confident that the authentic helmet has been pulled off a former battle site.

Since the interest in these helmets is constantly growing, collectors often wonder if it is worth the investment. No one is giving away the rusty helmets for free and something like the Waffen SS helmet can fetch a very high price. Given that the euro is much stronger then the dollar the cost of the helmet becomes even more considerable, especially since most of them originate from Russia and Europe. In fact the Luftwaffe helmet of the paratroopers is also quite expensive when it is dug up from the ground.

With hundreds of dollars worth of investment you can get basic relic shells which are damaged and rusted and with only a fraction of the decal visible. So one might wonder if it is actually a good investment and worth getting into. The interesting thing is that most of the sellers avoid focusing on this information and just start selling on the charm of finding a dug up relic. A German relic helmet seems to be perhaps the most collectible item from World War II.

The selection is still in a growing stage and rusted German helmets are in high demand. The values are mainly dictated by the sellers because they are personally involved in acquiring the helmets. They have commissioned people to go to foreign battlefields or have agents in the foreign countries and they have to recover their expenses of functioning as a modern day treasure hunter. With the former battle plan in hand, men go hunting for relics in fields and farms of different countries like Latvia, Russia and Poland.