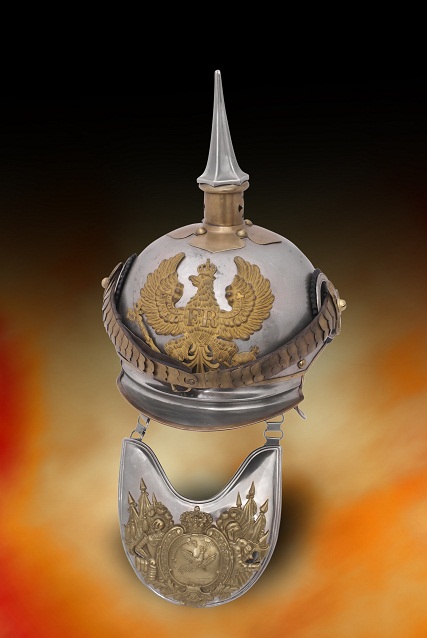 There are many German helmets being restored today. Most of them are rusted and dug out of the ground. These are found in different battlefields and burial grounds related to World War I and World War II. Any relic helmet that needs to be restored would have suffered the ravages of time. Most of them are exceptionally corroded and rusted. The primary goal is to preserve it and prevent further corrosion rather than restoration.

The first thing to do is wash the helmet with soap and water. This will remove all the soil, grime and different contaminating material. After this it is dried with heat and each speck of moisture is removed so that it does not corrode further. Following this process of removing contaminants the helmet is painted with an antirust or acrylic paint to prevent corrosion. Following this the selection is photographed and then stored in a sealed plastic bag to prevent interaction with the air. This will ensure that the helmet is not rusted any further.

The chinstrap may also be reattached with the liner on the inside. If the restoration is conducted on an original German helmet it can fetch quite a hefty price. However, when you want to purchase such a helmet is a good idea to choose a reputable seller or a military surplus outfit. The main reason for this is that a lot of helmets and novelty helmets are being sold after being converted into military and combat helmets.

Unique elements like an artillery shell stuck in a helmet that must’ve caused the concussion and subsequent death of a military man can be found in private collections. There are many helmets that have been restored and turned into utility items. One such helmet is in the Groenbeek Museum. It was converted into a colander to wash vegetables. Other helmets are restored because a lot of money is spent on acquiring them by treasure hunters.

Most of the regions for acquiring German helmets are in Latvia, Czechoslovakia, Poland and Russia. These were the major areas where German troops were engaged in combat during World War I and World War II. Since the Euro today is stronger than the Dollar, old helmets like the Luftwaffe paratrooper helmets and the Waffen SS helmets are very high-priced. The M. 1942 can still be found in its damaged condition. These helmets can be purchased at a military auction or a gun show.