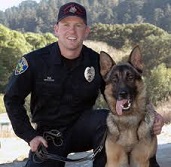 Require info on German Shepherd Police Dogs? Learn more about the role and scope of German Shepards as police dogs…

With the development in training technologies German Shepherd police dogs are trained today to assist law enforcement personnel and police officers. Initially the dogs were used as assistants to offer protection to police personnel as far back as the 19th century. This was a special necessity when they were patrolling dark alleys and poorly lit areas of the city. The dogs used in the 18th century were very ferocious and considered good for forceful control or chasing criminals. However, with the advancement in behavior management and better breeding, the German Shepherd police dog has become an indispensable part of law-enforcement agencies.

Police dogs are often called K9, a title which is a homophone of canine. In fact the police dogs are also protected by law and intentional killing and injuring of dogs is prosecutable under law. Furthermore, police dogs are given a proper funeral if they are killed in the line of duty.

Some dogs are even sworn in as police officers and given their own badge. Today most of the dogs which work in high-intensity crime scenes like drug cartel ambushes, bombs squads and criminal chases are even equipped with bulletproof vests.

The purpose and function of the German Shepherd as a police dog is manifold. It is used as a search and rescue dog because of the keen sense of smell. Not only can they locate people, but they can also sniff out certain materials like explosives and drugs if they are trained properly. The dogs are also used for public order enforcement. Initially they were just taught how to chase down a criminal and then bark profusely to inspire fear thereby making sure the criminal does not escape.

However, now the canine can actually hold down the criminal because it is trained with different techniques on grabbing parts of the human body without injuring the person. They make wonderful companions and are friendly and robust thereby bonding with the police officers that they are associated with. Another fine quality of the German Shepherd dogs is that they can also sniff out decomposing bodies underwater. As a dog easily trained in detection. illicit substances can also be traced by it. Since the dogs are very common across the world they do not startle passengers at airports or other locations.

Forensic scientists and teams benefit from using cadaver dogs to locate the decomposing body because of the odor that it releases. In fact, Dr. Debra Komar of the University of Alberta can be credited for her work in this area. Working in collaboration with the RCMP Civilian Search Dog Association she went on to develop training techniques that are one hundred percent accurate. The German shepherd is normally utilized as the attack dog and provides personal protection to police officers.

If a police dog becomes pregnant or involved in raising puppies it is retired. Furthermore, when they become too old or unwell to work they are also retired.

Engagement of the Police Dog

In continental Europe the dogs have been used since 1859. The Belgian police was the first federal law enforcement agency to provide personal protection to patrol officers. They were accompanied by German Shepherd police dog and these were exceptionally ferocious and instilled great fear.

Following their success in protecting the lives of police officers they were incorporated by police forces in France, Hungary and Austria along with Germany where the German Shepherd were actually developed.