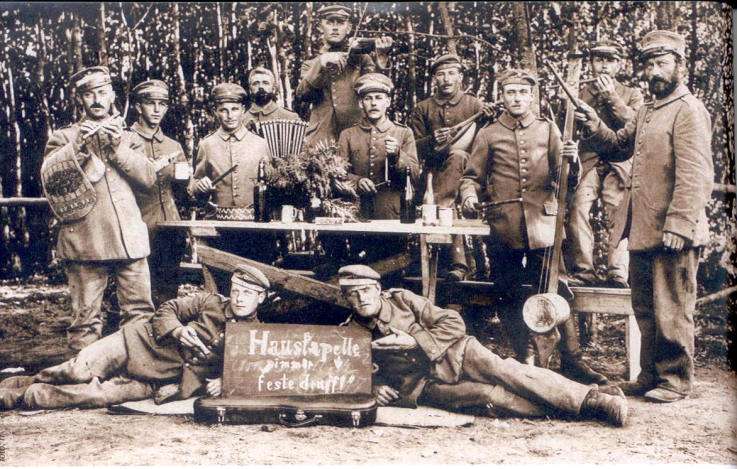 The German soldiers of World War I did not belong to a single army but in fact consisted of the armies of the monarchies of the German empire. Ironically the four kingdoms of Germany, Bavaria, Prussia, Saxony and Württemberg  had their own armies till the end of the war that changed history forever. These armies were commanded by their respective kings, who also served under the title of commander in chief. As the army of Prussia was the largest, the armies of the remaining three kingdoms were also eventually merged with the Prussian army in January 1871 along with the unification of Germany. Despite this merger the uniforms and insignia of the soldiers, belonging to the other kingdoms, did not change.

When World War I initially broke out, Germany was able to collect about 3.8 million men immediately as they already had fully trained soldiers, unlike the rest of the nations, who had to depend on volunteers.

However, the Germans still expanded their army by recruiting the German soldiers of World War I on their own free will or recruiting those who were forced to fight for the cause of their country. The army soon swelled to about 11 million soldiers and they were equipped with the latest technology in weaponry.

When the war broke out the German soldiers decided to attack France through Belgium before France would get a chance to attack and then also going southwards to corner the French army before it could do damage at the German border.

This strategy proved very helpful from 14 August to 24 August but by September 12 the French, with the aid of British forces, were able to stop the German’s advance in the east of Paris after the First Battle of Marne, which lasted from September 5 to September 12. This battle marked the end of mobile warfare in the west.

The German soldiers of World War I that were defending East Prussia consisted of only one army unit and when Russia attacked Prussia, the German soldiers intended for the Western Front were sent to support the soldiers at East Prussia. However, Germany was able to defeat Russia in the first Battle of  Tannenberg, which lasted from August 17 to September 2.

What the German General Staff failed to see was the fact that this diversion of soldiers would prolong the war, as now Germany was forced to fight on two fronts. Even though the German soldiers had less casualties than those occurring within the British and French armies, the lack of communication between the two war fronts, made Germany lose the chance of an early victory.

Losing the war was not the only hardship the German soldiers of World War I suffered, as many of them were traumatized due to the horrid conditions down in the battlefields and camps. Also, about 5.9 million soldiers were either killed or wounded out of the original 11 million mobilized before this epic war started.