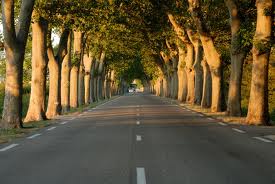 If you’re thinking about a self drive holiday to France rememebr to take the necessery papers along with you in case you get stopped by the French police. It is not uncommon for police in France to set up random road checks to make sure people are driving legally. If you are asked by a policeman in France for your documents while you are driving you must produce four separate documents; an official ID card, driving license, car ownership papers and insurance documents. The reason why police seem so strict with regards to producing papers is that car crime in France is a major problem.

The ID card must be a national ID card or a passport. Most foreign driving licenses are acceptable in France for up to one year of your arrival in the country. Card ownership papers are called cart gris in French which means grey car, while insurance documents are known as cart vert, or green card. Make sure you get both of these of the previous owner if you’re buying a used car in France. Anyone caught driving in France without these papers is subject to an on the spot fine at the discretion of the police officer involved.

Always make photocopies of your car related documents and never leave you insurance and ownership papers in the car. Car crime in France is rife and you don’t want to be a victim without the proper papers to report to the police.

Driving in France can be a thoroughly pleasant experience provided you remember you’re in a foreign country and they do things differently in France. For example, turning right at a red light in France is illegal whereas in the US it’s fine.

While driving in France be especially aware of the fact that all drivers coming from the right have priority. This is regardless of the sizes of the two roads and even applies on T junctions. French drivers are accustomed to this so will often pull out of smaller paths onto busy main roads expecting you to slow down. The exception to this rule in France is when you are on traffic circles. In such cases priority goes to the person already on the circle.

The driving limit on autoroutes, which are the largest motorways in France, is 130 km p/h. Otherwise the driving limit is 110km p/h on dual carriageways while it’s 90km p/h on smaller district highways.  Unfortunately speed limits in France are seldom posted on the roads so you have to be aware of these by yourself.