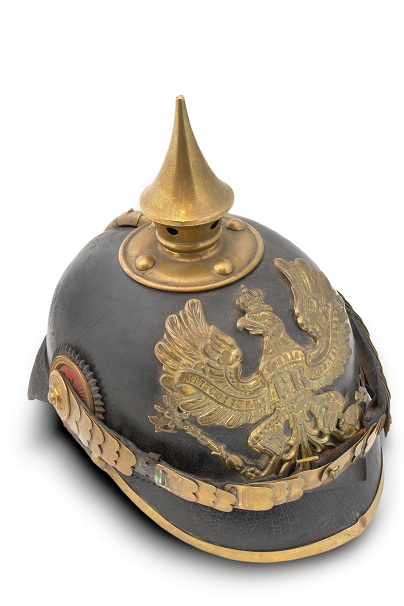 Interested in The German Helmets of WW1? Learn more about German WWI helmet and the military selection…

There is a large range of helmets available from the first World War, also known as The Great War. Different unit identifications are available for the German World War I helmets along with some from the Occupation Era. The German World War I helmet is crafted with a three pad leather liner and is fixed on a leather band. There is a leather chinstrap that is attached to the fixed lugs placed inside the helmet near each ear.

In this helmet the extended lug vent functions as a bracket for the bulletproof heavy front. There are reproductions that are easily available, but the original bulletproof plate is quite expensive. Each side of the helmet has different vent lugs selected so that the same plate can fit all the helmets.

The M. 17 is similar to the M-16 helmet with one difference. The liner band is made out of steel rather than the original leather. Without the liner it cannot be determined if the helmet was originally an M-16 or an M-17.

The major changes that are seen in the M-18 is the chinstrap attachment and the liner. The liner is a three pad construction and has a steel band to support it. The chinstrap is attached to the liner band. The lugs are no longer part of the chinstrap configuration. The Austrian M -17 is very similar to the German helmet because they are so similar in design.

The obvious differences are in the chinstrap attachment and the color. The German helmets were issued in green but the Austrian helmet was issued in  brown. The canvas chinstrap is etched onto the rings in contrast to the German leather that was part of the liner. There are also many fancy and decorated Victory Helmets that were brought home by soldiers returning from France and England after the war and Occupation Era ended.

Considered a very rare collection the pieces come from the collection of one of the members of the 59th Pioneer Infantry Regiment of the 2nd Army, AEF.
This unit was formed in Delaware and then deployed to France in the region of Meuse – Argonne. This unit was mainly involved in testing the new chemical warfare gas masks that were produced on mass scale after the tests were successful.

Often confused with German World War I military helmets by the ill-informed viewer, the helmet of the 59th Pioneer carried the swastika emblem. When the rise of Nazi Germany and Adolf Hitler along with the NSDAP became evident after World War I, this became politically incorrect.

It had attributes that were totally separate from the Third Reich emblem. The swastika was printed in yellow on a blue base surrounded by a yellow border. In contrast, the Nazi Germany insignia was printed in black on white and had a red coloring. Apart from this the 45th Infantry Division also utilized the swastika as the focal point for their insignia.