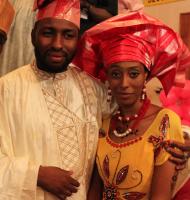 Ghanaian culture is characterized by various customs, beliefs, practices, etiquette, manners and protocol relating to every facet of life including food, music, dance, marriage, death, business and politics. Below is a look at Ghanaian cultural beliefs with emphasis on specific aspects of society in Ghana.

When greeting business partners in Ghana, do take the time to enquire about their health, family and jobs. It is deemed very rude to rush a greeting. Be sure to maintain eye contact during the greeting and wait until invited before you move to a first name basis. There is no formal ritual required for the exchange of business cards in Ghana. Receive and present business cards with two hands or the right hand, but never with the left hand alone.

From as early as the eleventh century, clothing in Ghana has served as a valued trade commodity and has continued to serve as a vital art form today. Like all other African textiles, Ghanaian clothing communicates on numerous varying levels with their bold designs, offbeat motifs and rhythms.

In Ghana, the family provides a very strong bond and is the primary source of loyalty, identity and responsibility. To the people of Ghana, obligations to one’s family precede everything else in life. Honor, dignity and a good reputation are important for Ghanaians to maintain. Due to the collective culture of Ghana, the loss of honor is shared by the entire family. It is therefore vital to protect this sense of face by maintaining a sense of harmony. It is for this reason that Ghanaians try to act with decorum at most times in order to avoid causing embarrassment.

As with most other performance arts in Ghana, dance performances involve intricate drumming and dancing. While most dances are organized by performers who are trained in the art form, there is a strong emphasis on the participation of the audience. Today, professional dance troupes have been formed which hold performances at theatres, international festivals and during public occasions, not forgetting at hotel lounges. One of the popular modern dance forms in Ghana is a samba-like dance style that focuses on high life music.

Traditional dress in Ghana is much more than just clothing: it is a symbol of social status, a means of communication and inspiration. Dress in Ghana tells the story of a fast evolving and dynamic society.

Death is one of the most important events in Ghanaian society, and is marked by most religions and ethnic groups through lengthy and elaborate funerals in which the entire community takes part. Traditionally, the dead were buried beneath the floors of their houses, but today only traditional rulers are buried in this way with most people being interred in the cemeteries. The soul of the departed is believed to join the ancestors in the afterworld where they will be fed and revered by their descendants.

There is etiquette to observe in most aspects of Ghanaian life. For instance, when greeting foreigners, it is common to shake hands with a smile. As a sign of respect, males over 30 years old are addressed as “pah-pah”, while similarly aged women are “mah-mee”. With regards to giving gifts, it is important to always give gifts using the right hand only or with both hands. The left hand should never be used on its own. Be sure to accept any invitation to dine in a Ghanaian home as this is a sign of friendship.

The basic Ghanaian diet comprises of a starchy staple that is eaten with a stew or soup. The predominant ingredients in the south include forest crops such as cassava, plantain, taro or cocoyam and tropical yams. Rice is popular as well as corn which is especially significant among the Ga. Fufu is the main dish of Ghana which consists of pounded plantain or tubers, combined with cassava. Ingredients for the soup will include common vegetables and some animal protein such as fish, invariably with some hot peppers.

Even with the advent of modern music, traditional music remains popular in Ghana. Ghanaian musicians regularly participate in musical festivals both locally and internationally where they offer a showcase of African music and dance.

Traditionally, family elders in Ghana were responsible for arranging the marriages of their dependents. Individuals were not allowed to marry within their lineages, and for the Akan, they may not marry within their wider clan group. The family of the groom was expected to pay a bride-price to the family of the bride. But today, young men and women in Ghana enjoy more freedom in choosing whom to marry. This new found freedom of marriage has led to a reduction in incidences of cousin marriage and polygyny, which were previously common in Ghanaian society.

Although the national government of Ghana was originally founded on the British parliamentary model, the West African country is today governed via a constitutional democracy that follows the American tricameral system. The state functions as a multiparty democracy headed by an elected president, a legislature and judiciary. Government is divided into 10 administrative regions that are staffed exclusively by the central government. The regions are further subdivided into local districts that are organized under the district assemblies.

Youth in Ghana are treated with indulgence and affection. Early discipline is relaxed and the youth are provided with plenty of stimulation with emphasis on social contexts. Parents, siblings, uncles, aunts and other relatives will take a great interest in the youth and often assume responsibilities with regards to caretaking, which may at times be on an extended basis. Many Ghanaian cultures mark the coming of age of the youth through puberty ceremonies for girls which are completed before marriage or childbirth.

Cultural beliefs and practices are what hold communities in Ghana together. In fact, Ghanaian cultural beliefs can be easily equated to the fabric of society, which weaves individuals together for cohesion and strength.