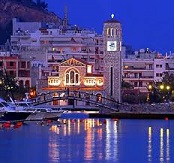 Volos is a major city in Greece, offering the hustle and bustle of city life, coupled with beautiful architecture and the tranquility of the harbour.

Volos is a large and bustling City in Greece, situated on the tip of the peninsula at the foot of Mount Pilio. Volos has strong transport links in Greece with rail, sea and an airport. The beautiful harbour of Volos is one of the major commercial ports of Greece as well as providing Ferries and Hydrofoil to the nearby Sporades Islands that include Skiathos, Skopelos and Alonissos.
Volos, which is situated between the two major cities of Greece; the Capital Athens and Thesalonika, its second largest City, has fast rail links to these parts of Greece and the Airport can be reached directly from airports in Britain.

Volos was annexed to Greece from the Ottoman Empire in 1881 and, at that time, had a population of less than 5.000 inhabitants that rapidly increased over the following decades so that Volos now supports approximately 100.000 people.

The Volos we see today which has made it one of the major Cities in Greece was built from the mid 19th Century. The planning and building of Volos was very much influenced by the neo classic era making it a very attractive City with its majestic buildings.

However, Volos suffered considerable damage in the catastrophic earthquake which hit Greece in 1955 and much of modern Volos has evolved from the rebuilding of the City at that time.

For the visitor, Volos offers the excitement of a fast moving City typical of Greece, with its shopping and its eating houses, many of which are centred around the lovely harbour of Volos and provides a gateway to the beautiful Pelion Mountains or the Greek Islands.

To the west of Volos can be found a Neolithic site for the visitor seeking a glimpse of the ancient past of Volos and Greece. These settlements near Volos feature a ruined acropolis, walls and two beehive tombs dating back to 4.000-1200 BC. Also, the oldest acropolis in Greece, 6.000 BC, can be found near Volos together with the foundations of a palace and mansions typical of the Neolithic past of Greece.

Volos is not to be missed when visiting this beautiful and verdant part of Greece.

Greece
Planning a trip to Greece and thinking of visiting Athens? The following article may

Greece
Tips on body language and meanings in Greece. Body Language Projecting your hand with

Greece
Travelling to Greece on business or to invest in a property? Get some information

Greece
This year Greek Easter coincides with the Latin Easter on the 4th April 2010.