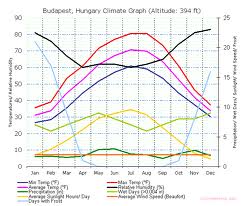 Are you going on holiday to Hungary? Would you like to know a little about the climate and weather in Hungary? Our guide to the climate in Hungary gives you the facts & information you’ll want to know.

Hungary is a landlocked country located in the centre of Europe.  Hungary lies at a latitude of 47 degrees north which is roughly equivalent with the north of Italy and the southern half of France.  Generally speaking, the climate in Hungary is a moderate one with warm and quite long summers and winters that are cold. Of course there are fluctuations in general climatic conditions in Hungary depending on what part of the country you are in. Below we highlight the general differences of climate within Hungary.

Climate in the west of Hungary

The geography of Hungary in the centre and east is dominated by the Great Plain, where the landscape is largely flat and low. Although the summers here are generally hot and dry and winters are wet and cold, the fact that there are no great geographical features to break up the wind, means that the wind chill factor during the winter months becomes especially cold.

Climate in the south of Hungary

Because of its comparatively low latitude, spring comes earlier in the South of Hungary than it does to other parts of the country. This, in combination with long hot summers, makes for the warmest overall climate in all of Hungary. In general, winters in the south of Hungary are short never beginning before November and the temperatures rarely drop below 0 degrees centigrade. The rainy season in the south of Hungary tends to come in the summer when average monthly rainfall figures are twice what they are in other seasons.