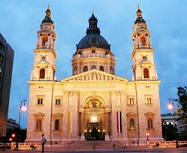 Are you going on holiday to Budapest in Hungary? Do you want to know where the best sightseeing spots in Budapest are? Below we’ve highlighted the best sights in the Vizivaros area of Budapest.

Vizivaros or ‘water town’ is the name given to an area of Budapest located on the western bank of the River Danube below Castle hill. Whereas Castle Hill would have traditionally been where the elite of Budapest were, Vizivaros was more for the commoner and as a result the area has traditionally been less wealthy than its neighbour on the hill. Nevertheless a sightseeing visit to Vizivaros is worthwhile for a number of reasons, some of which are mentioned below.

St Anne’s Church located in the Vizivaros district of Budapest should be on any sightseeing itinerary of this area of Budapest. Not only are most of the other sightseeing attractions in Vizivaros easily accessible from here, but the church itself has a history stretching back several hundred years and features a typically baroque interior. This church is in fact one of the best examples of Hungarian baroque architecture in Budapest.

The Buda concert hall is another building of historical pedigree that may be of interest to sightseeing enthusiasts. The hall itself it still used for various musical performances which are well attended by locals in Budapest.

This church in Vizivaros was previously used as a mosque during that period of Budapest’s history when the Ottoman Turks ruled. Although the building has long since reverted to being a church, there are some interesting remnants of Ottoman architecture and décor to be found. This church is located at number 20 Fo Utca.

The military court of justice is a building that holds more than a few dubious distinctions. Among them, this was the building where many anti-communist dissidents would have been brought to be tried and sentenced. This sightseeing opportunity is a good place to go to gain a better insight into how life was like in communist Hungary.

Vizivaros is the unlikely home of Gul Baba, a 16th century Muslim saint who lived and died in Budapest. The tomb is still present today and open to visitors.

Vizivaros is home to the oldest and only remaining Jewish Synagogue in Budapest that is located west of the River Danube. The synagogue is still used for conducting prayer services by Hungarian Jews and it is possible to take a look around.