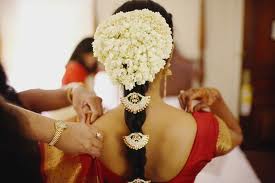 The changing trends have greatly influenced Indian bridal hairstyles. Traditional Indian brides have long hair because hair is a sign of beauty and women with long hair are thought to be productive. Hair is kept short in traditional societies only when a woman shaves off her hair as a widow or sacrifices her hair in tonsuring ceremonies for religious purposes. Hence, long hair has developed bridal hairstyles that are elaborate and exquisite to behold.

Indian bridal hairstyles can make a bold statement when the bride opts for somewhat avant garde styles. This is where the style involves piling up the hair on the head and interspersing the hair with dramatic objects like bangles for a funky look. Traditional hairstyles keep the hair away from the neck in long braids that are weighted down with tassels. Decorative faux jewels are encrusted on the top of the hair. The hair may also be knotted at the back of the head in a bun which is decorated with twirls of faux jewels.

Indian bridal hairstyles that take account of the hairstyles of Bollywood movie stars account for many of the newer styles among brides. Many Indian hairstylists would recommend latest hairstyles for brides who seek an opinion on their potential hairstyle. These styles favor long flowing tresses that are curled and topped with a tiara sparkling with imitation diamonds. Most hairstylists would also color the bride’s hair in keeping with the current trend of highlighting hair and using hair extensions. Generally the bride’s hair would be done first before the makeup and the bridal attire are worn.

Indian hairstyles have evolved from being long and braided to being wavy and shoulder length. Hair is widely regarded as the crowning glory of an Indian woman and hairstyles are changed in modern times in keeping with the current fashion. Hollywood celebrities do not have as distinctive an impact on Indian hairstyles as Bollywood starlets. Movies provide a fresh avenue for hairstylists to reproduce styles suitable for trendy Indian women.

Indian bridal hairstyles could range from the traditional long braid with faux jewels to modern wavy tresses and a tiara. You could watch the styles of Bollywood stars for your next hairstyle adventure!