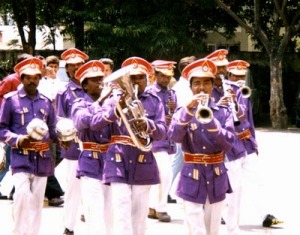 The type of Indian marriages band used in a wedding ceremony will largely depend on the place of origin of the couple. For instance each state boasts of its own wedding music which is played in the venue. However the most traditional and popular musical instrument used is the shehnai. But an Indian wedding ceremony with it numerous parts calls for more than just one band or type of music. The ceremony starts with the sangeet which is akin to the bridal shower. Now depending on the social and economic background of the couple this can be a simple homely affair or a gala ceremony. Normally you would hear a lot of Bollywood songs in this ceremony accompanied by Bollywood style dancing.

Then there is the baraat band. This is the procession that takes the groom to the wedding venue. Traditionally the groom would reach the venue on a white mare decorated beautifully. But some grooms prefer cars. Either way the procession is followed by musicians playing instrumental music; again usually a rendition of popular Bollywood numbers. It’s a very ostentatious ceremony with everybody from the groom’s family dancing and having a ball. When this procession reaches the wedding venue they are greeted by the bride’s family and here the band from the bride’s family will normally play traditional wedding music.

The music is played in the background throughout the ceremony. Once the wedding ceremony has been completed the mood changes and the music shifts gear reflecting the joy of the families. Once again a lot of film songs are played. Some families host other events after the ceremony like ghazals or romantic songs for guests. Others may even have professional performers over. It all comes down to how much money has been spent. Then there is the bidaii ceremony as well. This is where the young bride (metaphorically of course) is leaving her parents’ household to go with her husband. And surprisingly even today the ceremony includes quite a bit of crying and hugging.

Finally the wedding party departs the bride’s house and in the groom’s house there will be another ceremony awaiting them. Normally traditional ‘welcome’ songs are sung by ladies.

This chronology of event is by no means exhaustive and depending on the preferences of the two families and the couple; it may even include a night of partying at the discotheque for the young couple and their friends.

USA
A Palm Desert location makes an excellent wedding venue. If you want to plan

Turkey
Interested in Turkish wedding food? Want to know what cuisine is typically served at