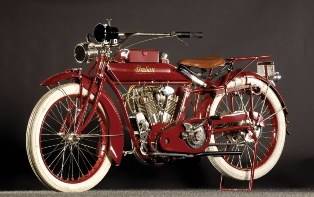 The term vintage Indian motorcycle can mean anything from a 1920s model, to a rebranded model from the 1950s, to a Gilroy Indian motorcycle from 2002. And yet each of those vintage models would have a fascinating story to tell if they cou

Anyone who has a vintage Indian motorcycle that is in good shape needs to have it included in any last will and testament, because it is probably very valuable, both to collectors and museums. The first Indians were built in the first decade of the 20th century. There aren’t very many of these left, but there are some from the 1920s, and many of them are fitted with sidecars, because cars were not yet common possessions.

The Indian motorcycles from the period after the company went out of business in 1953 are rare as well, but some enthusiasts and collectors don’t consider them to be “real” Indian motorcycles since they were largely British Enfield bikes re-badged as Indians. Re-badged Indians were available in small numbers for decades after the company folded, but again, some people do not consider these to be genuine.

The second incarnation of the Indian Motorcycle Company was formed in 1999 and was headquartered in Gilroy, California. These bikes elicit strong feelings among Indian loyalists, too, with some proud to own a slice of this brief (four-year) period in Indian motorcycle history, and others thinking that the Gilroy bikes aren’t deserving of the Indian name. Regardless of the varying opinions on provenance of these bikes, the fact remains that they were some really beautiful pieces of machinery.

When the Gilroy plant went out of business in 2003 after a financial partner backed out, a lot of people thought the brand was gone for good, but in 2006 the trademark brand was bought, and a new factory was built in North Carolina, making original Indian bikes that pay homage in style and abilities to the classics of the early 20th century models.

Of course, it will be a while before the Indians manufactured in North Carolina will attain the status of vintage, but when they do, they’ll be joining the ranks of some of the most admired and coveted bikes ever made.