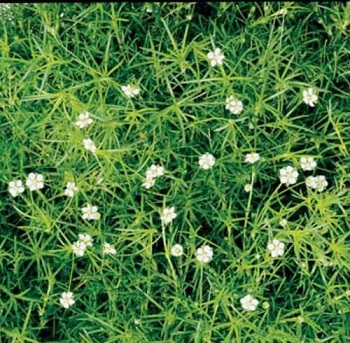 Interested in growing Irish moss? Find out how you can grow this unique seaweed at home…

Irish moss is a mat growing hardy perennial that looks like moss but is actually seaweed. They can reach up to a height of 10 cm. Tiny lime green colored leaves characterize this plant with tiny white flowers that blossom in spring. Irish moss can be grown at home to serve as filler in rock gardens, stepping zones and bricks.

The best time to start growing Irish moss is during the spring or autumn season. Once the seeds have been sown in the ground they should be lightly covered by sand. In general the seeds should be sown at a distance of 10 cm from each other. If however you have the spreading variety then you should space it out 20 cm apart from each other. You should plant your seeds in an area that receives plenty of sunshine during the day. The soil should be sandy and moist yet not too wet.

One of the best things about Irish moss is that it is real easy to take care of. Since Irish moss likes moist soil it is important that they be watered regularly. They should be watered on a weekly basis during the first year. Care must be taken not to make the soil too wet. This is why it is important to plant your seeds in well drained soil. Irish moss should also be given regular feed. In order to protect your Irish moss from aphids you should try and grow them near plants that attract ladybirds.

Cultivation of Irish moss is not possible. Yet the seaweed can be collected from the rocky coasts off Ireland. This region has low tide all year round which makes collecting them really easy. Irish moss should not be harvested from polluted areas.

Know that Irish moss needs to be rinsed thoroughly prior to making use of it. The way to prepare it for use is to soak it in water and then cook it until the liquid sets yet the moss does not dissolve completely.

The dried herb can then be turned into a decoction. It can be consumed by adding half an ounce of the herb into water and bringing it to a boil. It can be strained and combined with other juices to form a delicious drink that also has immense health benefits.

Irish moss can also be used for culinary purposes. It serves as an excellent alternative to conventional gelatin. It is used as a gelling agent in the preparation of stews, soups, salad dressings and gravies. It is also used as a stabilizer in a wide range of dairy products as well as a key skin softening ingredient in lotions.