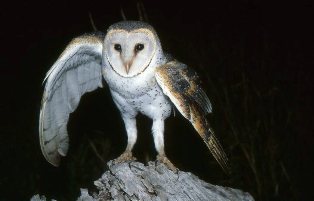 Looking for information on Australian owls? Then read our factual and informative guide…

The owls that can be seen in Australia include:

The Barn Owl, commonly known as the Screeching Owl; the Barking Owl known as Winking and the Christmas Island Hawk owl.

The Grass Owl and the Sooty Owl: This is by far the most popular owl found in Australia and the bird is well loved in Australia as well as the other parts of the world. These birds are known for their characteristic flat facial disk and the heart shaped mask. They have small black eyes while their feathers are fawn to grey with black on the upperparts. The bird has a soft plumage which allows for silent flight. These birds are predatory in nature and survive on mice and rats which are eaten whole along with the fur and bones. They breed all year round and their nests are usually found in hollow tree trunks.

The Boobook owl is a considerably larger bird but it has very similar facial features with a dark brown upper body and large yellow eyes. The under parts are usually white with streaky brown while the upper body has some white parts. These birds make a very peculiar double noted sound. They are found in most parts of Australia except for Tasmania. The Boobook owls prey on small birds, rabbits, mammals and insects.

The Grass Owl, aptly named is different from the other birds found in Australia; these birds shelter during the day in dense grass tussocks. The physical traits including the color of these birds are easily distinguishable from the other two owls. They make a hissing screaming sound and nesting occurs throughout the year but is particularly common in March to June. The female lays three to eight eggs and only the female incubates the eggs while the male brings food for the female. These owls are generally found in the extensive grasslands along the east coast of Cape York to New South Wales. It is also seen in the grasslands of Barkly. These birds are also seen in South Africa, India and Fiji.