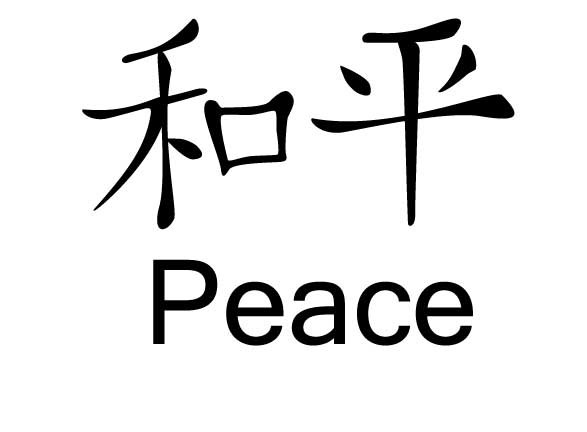 Discover the ancient traditions regarding Chinese peace symbols and find out how they are being incorporated into latest fashion trends today.

The Chinese writing system makes use of characters known as Han characters. The total number of characters in the Kangxi dictionary is a staggering 47,035 although a large portion of them are no longer used. The important thing to understand is that the Chinese characters are actually symbols that represent complete ideas rather than words constructed from letters with phonetic values.

Amongst the many popular symbols is the Chinese peace symbol. Peace is something that everyone is in search for. The meaning of peace as symbolized by the Chinese character does not necessarily mean the absence of war. Rather peace is a feeling of contentment in the heart which is one of the most valuable things in life.

The Chinese way of acquiring peace

According to ancient tradition the Chinese people have made intensive use of their symbols as a means of attracting good things as desired. The feeling of peace being one of the dearest things to human nature the use of the peace symbol is found extensively in Chinese culture.

So what is the Chinese concept behind the peace symbol? Well, according to them if you surround yourself with peace symbols you will ultimately achieve peace within your self. At least this is how they have made use of the peace symbols throughout the history of the nation.

In fact the peace symbol is not the only character that has been used to attract good things in the lives of the people. Good fortune and blessing symbols of various kinds can be found in people’s homes, shops, cars and offices.

The modern perception of the ancient tradition

Today the Chinese peace symbol is amongst the most popular characters used not only in China but also around the world. The west is particularly infatuated with Chinese symbols and peace being a universally appealing idea is right on top of the list.

As it is the concept of peace is considered to be cool in the eyes of the western youth. When the same concept is represented in the form of a Chinese symbol that looks amazing because of the way it is composed the symbol gains even more credibility and appeal. Hence we find a wide range of fashion accessories and clothing gear featuring the Chinese peace symbol and selling like hot cakes in the western world.