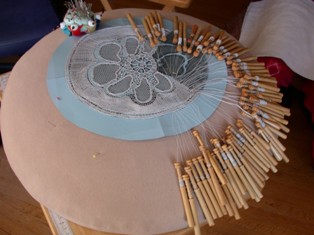 The Association for Australian lace bobbin makers is also part of the Australian Lace Guild. It was established in New South Wales in 1979 to cater to the requirements of those people interested in the craft of lace making. It was incorporated in the state of Victoria on 20 August 1985 and its administrative staff relocates to different states every three years. Its main objective is to promote the craft of lace making in Australia and provide a joint platform to those interested in the craft on a national level. Furthermore, the Association functions as a platform for those involved in creating lace and its supplies, such as lace thread and Australia bobbin makers. A standard of excellence and passing on the knowledge of the craft are maintained by this guild.

The members of the association include Australian bobbin makers and other toolmakers, lace artisans, historians and collectors. They deal with different types of lace like the needle lace, bobbin lace, tatting, crochet, macramé and other techniques for creating unique and intricate laces.

Lace bobbin makers in Australia have different predispositions and one of the interesting types of lace bobbin is the square lace bobbin. The bobbin makers in Australia have created some interesting replicas of the previous types including an un-spangled bobbin, which is partly square and partly turned. This basically means that the bottom is square and has a shank to give it stability and a little weight to prevent it from rolling while fulfilling the spangle’s function. There have been many antique varieties found of the square lace-bobbin kind. The majority of these are the whittled bobbins, which are hand carved and have square shanks.  It is easy to find them in the catalog listed under hand carved action within the sub category of square bobbins.

One collector of bobbins in Australia, David Collyer, has access to ancient bobbins, which are handmade and originate from Tasmania. These are exceptionally long and belong to the last century in Tasmania.  One of the earlier bobbins was purchased as far back as 1981 when a South African bobbin was purchased in New England, Australia at a lace convention. Bobbin makers Neil Keats and Brian Lemin are well known Australian craftsmen.

Pros and Cons of The Square Bobbin

The reason for the popularity of square bobbins made in Australia is simple. While there are some cons and practical issues with this tool there are also advantages in using the square bobbin. It is not necessary that they be spangled, but they don’t roll. Even though the carving looks very pretty the thread gets stuck in it when you’re crafting lace. Some of them are very long and this increases the requirement for the length of the leash, making it inconvenient. There is more control on the short leash bobbin. It’s possible to mix them with other kinds of bobbins. Because of some of them don’t roll the rest of the bobbins will stay in place because the square bobbins act as brakes.