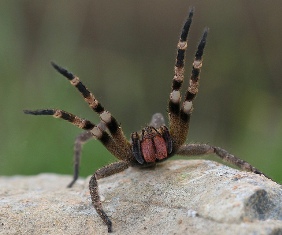 The Brazilian Wandering Spider is known to be the deadliest spider on the earth and is commonly found in Southeast Brazil and the Amazon. Read our guide for more facts and information…

Spiders are arachnoids known for their characteristic webs that trap or capture the prey. Their abdomens have appendages that form spinnerets to extrude silk for spinning webs. But the Brazilian wandering spider is a peculiar species that does not spin webs or wait in ambush for the prey, but moves actively on the jungle ground to catch its prey. It feeds on large insects, crickets, small lizards and mice and is noted for its deadly sting. Apart from its highly venomous nature, the wandering spider is aggressive and territorial.

Description of the Brazilian Wandering Spider

The term Brazilian Wandering Spider refers to eight species of dangerous spiders, which belong to the Phoneutria genus. In Greek, the word Phoneutria means ‘murderess’, and the first species was found in Brazil. Unlike common spiders, wandering spiders crawl actively on the ground in search of prey during nights. They are characterized by scarlet red hairs over their fangs and have an abdominal diameter of about two inches with the leg span reaching up to fifteen centimeters. Of the eight species, two are the most dangerous and responsible for most spider bites, owing to their wide distribution in southeastern parts of Brazil and Amazon.

Interesting facts about the Wandering Spider

The wandering spider does not spin webs, but scurries all over, hunting for prey during nights and hiding during the day under anything. It may hide under cracks, crevices, logs, leaves etc. in the forest, in shoes, boxes or clothing in houses. It is prepared to attack humans aggressively, and is also called Banana spider, as it has a tendency to hide in banana bunches. It has a unique defense posture, whereby it stands on its back legs, putting its front legs up and sways its body from one side to the other.

The spiders fight over their territory if there are too many of them in one place, and when in captivity, they do not do well and might even stop eating. The female spider chooses the male spider for mating, and after mating it controls the sperm to fertilize the eggs; it may even wait for a year. It then creates a sack from silk produced from its body to protect the eggs.

The venom of these wandering spiders contains neurotoxin that acts as a calcium channel blocker, which in turn hinders glutamate release. Resultantly, the calcium and glutamate uptake during neural synapses are inhibited. When the spider bites, high concentrations of neurotoxin result in loss of muscle control and breathing problems. Eventually, it leads to paralyses and victims may die of asphyxiation.

Many extermination methods are employed to rid them off, such as spider zappers, spider repellers, spider traps and spider catchers. They get into houses through open windows, and they can be kept off by certain precautionary measures. Some common ways include wearing gloves while working outdoors, carefully picking up objects from the ground and keeping clothes and shoes off the ground during nights. Any person bitten by the spider requires emergency medical treatment. The quantity of venom injected varies and it tends to cause inflammation and intense pain. Antivenom is usually administered to counteract lethal effects.

The Brazilian Wandering Spider has been named as the world’s most venomous spider by the Guinness Book of World Records during the year 2007.