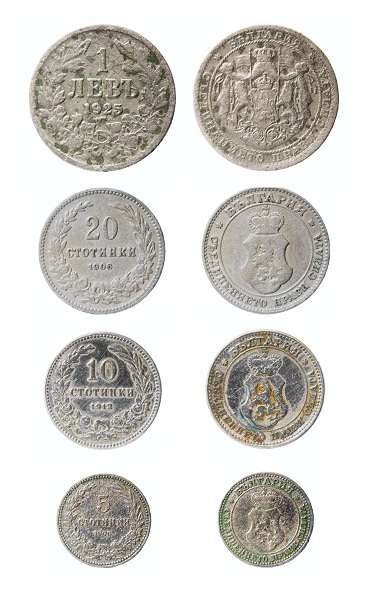 Are you interested in learning about the coins that comprise the current Bulgarian currency? Do you want to discover some of the commemorative Bulgarian coins? Read our guide for more facts and information…

At present the lev is the denomination that Bulgarian currency is established in, in this way the lev is similar to the British pound or the American dollar. The lev has long been the base denomination as the coin and unit were first introduced in the year 1881. The lev is generally gold in colour although there are silver lev coins in circulation; the silver coins are more commonly reserved for the stotinki which are the subunit or cents of the lev as 100 stotinki are required to equal one lev. Neither of these coins are actually made from either gold or silver but rather the materials of nickel or brass or a combination are used when pressing the coins.

When the lev was first introduced to the world markets the coin’s value was pegged to the French franc; however, as the interests of Bulgaria shifted and so too did their alliances their currency was pegged instead to that of their powerful allies such as the German deutschemark and then the Russian ruble. Today, the lev is commonly pegged to the American dollar but as the Euro has gained prominence the system has again shifted.

All Bulgarian coins come with a few standard features in their design as all of the pieces feature an engraving of their value, the date that the coins were minted as well as an etching of the Bulgarian coat of arms on the reverse of the coin. The front of the lev coins usually feature a Bulgarian landmark or President while the stotinki coins have traditionally and continue to feature an image of the Madara Horseman. The Madara Horseman is a national symbol in Bulgaria as it is a natural formation in an early medieval rock relief that is found in their national mountain range.

One of the most famous commemorative coins issued by the Bulgarian government was first minted on April 25th of 2005. The coin was minted as the Bulgarian government tried to gain support for the conversion to the Euro so the coin issued was given the same value of one euro or the equivalent of 1.95583 lev. This coin is marked with its historical significance in Cyrillic, which is the written language employed in Bulgaria.

It is a national goal within the country to be allowed to and to successfully adopt the Euro currency by no later than the early part of the year 2012; it is believed that adopting the Euro will allow the country to better interact with the rest of Europe as well as improve its competitiveness on the international market. In a nationwide vote held in schools, post offices, and government buildings it was decided that the national side of the Bulgarian Euro will feature the Madara Horseman, which is currently featured on the stotinki.

USA
Interested in buying American Eagle gold coins? Discover the true worth of the amazing