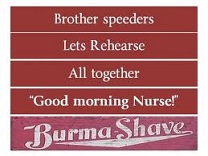 Wondering about the Burma Shave signs? Read on for the history of how they started…

Burma Shave was started by the Odell family after their company Burma-Vita failed to do well in America. With the birth of Burma Shave in 1925 came the innovative way of advertising the brand, the Burma Shave signs.

The Creation of the Signs

The signs were not thought of as soon as the brand was created and was actually an idea that was initially vehemently opposed.
It was Alan Odell who first came up with the idea of setting up road signs that would advertise the product. He drew inspiration from the signs that he had seen on the roadsides, during his travels to sell the Burma Shave jars door to door. His father, not being as enthusiastic as Alan, blamed the idea on a bad case of homesickness and dispelled it.

Finally when sales began to drop to the point where the company was at stake and desperate measures had to be taken just to sustain it, Mr. Odell decided to give the idea a try. He gave Alan $200 to start with, thus the Burma Shave signs were born.

Owing to the company’s limited money, the first Burma Shave signs were made using second-hand boards that were cut into pieces of 36-inches and painted. The initial signs were not supposed to be funny or rhyming and had straight forward messages pertaining to the product written on them.

About two dozen signs were put up on the two roads that were going out of Minneapolis. The campaign was an instant hit and almost all the people using the main thoroughfare were going to drugstores to buy the brushless cream. When orders started pouring in to Burma Shave, the company sold about 49% of its stock so that it could set up a sign shop and that is how the signs came about.

The Progress of the Signs

The facts that people had time on their hands in the yesteryears and automobiles were not as fast worked great for the Burma Shave signs. As the signs became more popular, the text on them became increasingly witty and eventually started rhyming. What added to the intrigue of this creative advertising style was the way six signs were spaced about hundred paces apart, each containing only two words max. With the passing years, the way the signs were placed and sized had to be adjusted according to the better roads and higher car speeds.

Why they were successful

Normal billboards had a mouthful of words, out of which only a few could be read as the car passed by. However as the occupants of the car only had to read one or two words per sign, they could read the entire ad with ease. The classic humor that was incorporated in making the signs also compelled the reader to hang on till the very last word of the advert and the spacing between the signs created a certain air of mystery. Even though the Burma Shave signs are gone, their memories remain, forever embedded in the minds of those who encountered this amazing marketing gimmick.