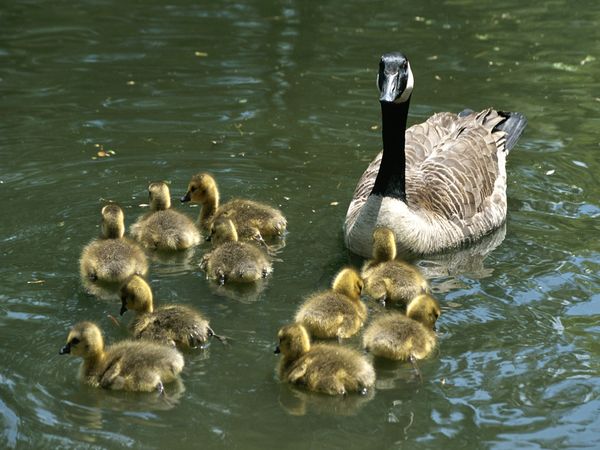 Looking for interesting facts about Canadian Geese? Read our guide for more facts and information…

The Canada Goose is recognizable by its distinctive colourings. The species is characterized by its greyish coloured body combined with a solid black head and neck with white cheek patches. Canada Geese appear to all look the same. The species may appear relatively uniform; however, there are many different species of Canada Geese. The species are distinguished mostly by size as some smaller varieties weigh as little as 1.1 kilograms with a wingspan of 90 centimetres, while at the other end of the spectrum a Canada Goose can weigh up to 8 kilograms and have a wingspan of 2 metres.

The Canada Goose like most birds migrates every year. Canada Geese begin to prepare to migrate in the late Fall when the ground in the North begins to freeze. In an effort to prepare for the travelling of migration Canada Geese eat more prior to making the trip. The Canada Goose migrates from its Northern locations, including Greenland, to the Southern United States or even Mexico as Winter in the Northern hemisphere approaches. The Canada Goose migrates a considerable distance; however, the migration period is not long as the birds can travel more than 1000 miles per day. When migrating the Canada Goose is easily recognized as the flock flies in a V-shaped pattern.

The Canada Goose may be named after the country of Canada but the species can be found all over North America depending on the time of year. Canada Goose adapt well their environments, although ideally they like to live in low areas with lots of open waters. The Canada Goose when nesting will often make its nest on an island in an effort to provide increased protection from predators.

The Canada Goose is also an interesting bird as it has many unique characteristics. One interesting fact is that the species mates for life usually in the second year of life. It may be true that the species mate for life; however, it is also a fact that if one of the mates die, the remaining goose will take another mate. Another fact about the Canada Goose is that many of the species use not only the same nest each year but also build their nests in the same area that their parents did. The Canada Goose also spends a large amount of time eating grasses, roots and leaves as up to 12 hours per day can be spent foraging for food. Canada Geese as a flock also fly in a V formation the reason behind this is the fact that the formation makes it easier to fly and assists with communication. The Canada Goose has also successfully adapted to urban life as the population in urban centres is expanding. The adaptability of the Canada Goose is lastly proven by the fact that the average lifespan in the wild is 24 years.