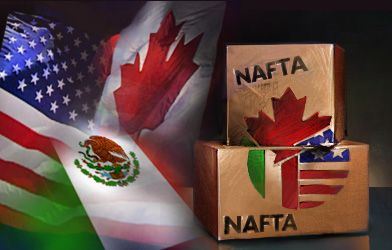 NAFTA is the acronym that represents the North American Free Trade Agreement that exists between the three countries of North America: Canada, Mexico and the United States. NAFTA was ratified as legislation in the three involved countries by late 1993 and the agreement officially came into effect on January 1st of 1994.

When NAFTA was officially ratified the agreement created the world’s largest free trade area and effectively linked 439 million people. NAFTA has also generated a connection between the three involved countries which has led to other benefits such as agreements being generated to regulate labour and the environment in North America.

Increasing Trade between the involved countries

NAFTA is primarily an agreement designed to increase and ease trade between the involved countries. Since the signing in 1994, Canada has seen huge benefits with the increase in trade that has been generated. In 1993 before NAFTA came into effect trade between Canada, the United States and Mexico was 297 billion dollars per year; after NAFTA was ratified the benefits were immediate and continuous as by 2007 trade between the partners had tripled to 903 billion dollars per year.

Trade of commodities is not the only thing that has grown in response to NAFTA as Canada also has benefited from an increase of trade in services.

Throughout the countries involved in NAFTA since the document has come into effect it is recognized that the standards of living have steadily been rising, which can only be considered a benefit of the agreement. The improvements in living conditions are in part due to the generation of jobs.

Under NAFTA businesses have become more profitable and competitive leading to job creation in Canada and the other partnered countries. The increased economic activity due to trade is also a benefit as the activity helps generate jobs. Canada also directly benefits from the agreement as one in five Canadian jobs are at least in part related to trade.

Also by creating the link between the three North American countries firms located in Canada, Mexico, or the United States are allowed to bid on government contracts which generates more opportunities and can help attract business.