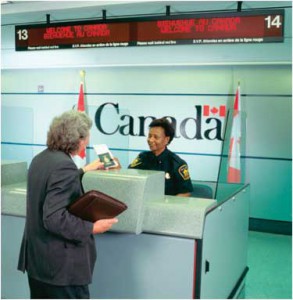 Every country has specific rules and regulations for border crossing. If you are looking to make your way into Canada you need to be aware of the Canadian border entry procedures which vary according to the citizenship of the traveler.

A US citizen making his way to Canada has to present his or her original passport along with other approved travel document. This is mandatory when traveling by air. US citizens can also produce their nexus card at specific airports which have nexus kiosks. The US military ID accompanied by traveling orders is also sufficient for gaining permission to cross Canadian borders. For traders a Merchant Mariner Document will grant them access into Canada for official business.

When traveling by land or sea US citizens are required to produce adequate travel documents that are in line with the rules and regulations laid down by the Western Hemisphere Travel Initiative. This most commonly consists of a US passport, a trusted traveler card the likes of SENTRI, FAST or Nexus, a passport card and an enhanced drivers license

Lawful permanent residents of Canada are required to present their passport or  secure travel documents when making their way to Canada by air. When traveling by land the I-1551 permanent resident card will suffice.

Canada border Entry Procedures For Citizens From Other Countries

Irrespective of the country of origin all international travelers are required to produce their passport along with secure documents when making their way to Canada by air.

The law for Bermudian citizens is pretty much the same as it is for Canadian citizens. Any document that complies with the guidelines of Western Hemisphere travel initiative will suffice for them.

All Mexican citizens irrespective of their age, which includes children as well, need to produce a passport along with a non-immigrant visa when attempting to cross Canadian borders. A laser visa border crossing card which has just been introduced is also sufficient for Mexican citizens.

Canada Border Entry Procedures For all Others

The procedures for entering Canadian border vary according to your traveling status. For travelers making their way under the visa waiver program the only requirement is to present and e-passport in cases where the passport has been issued after October 26, 2006. The regulating authority may also ask you to give digital finger scans along with digital photographs on your visit.

The border entry procedures for Canada keep changing over time and it is highly recommended that you update your information prior to making your way to this country.