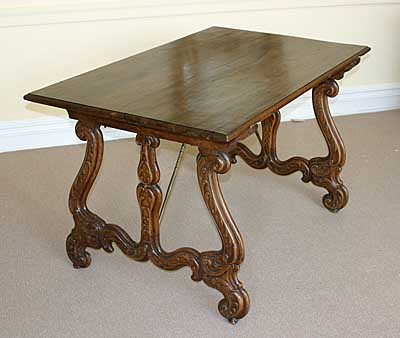 Want to buy an antique French table? Do you know how to tell an authentic French antique table from a fake? Our guide gives you the facts & information you want to know.

There is no better piece of furniture to create a French country feeling in your house than a French antique table, or perhaps an antique French armoire. These 18th and 19th century pieces bring about a very rustic feeling, even in small city houses. There are three main types of antique French country tables and those are the harvest table, trestle table and Refectory table. The reason that these tables bring about such a country European feeling is that partaking of food around the table was such a big part of the European culture at the time. This image has stuck with us till today.

One of the most popular French antique tables is the Refectory table which originated in the 16th century. These were commonly used in Monasteries which is why they have their name; the Refectory was where all the eating took place. They were strong tables made of hard woods such as Oak and Walnut wood, which very often matched the antique french doors in many houses. These tables could take a beating and still be in neat mint condition. Refectory Tables were made of several joined wood plants which rested atop beveled legs. This may sound simple but joining this together was one of the hardest things carpenters and cabinet makers would do. Many of these tables also have a drawer at each far end.

The trestle table was a smaller, simpler version of the Refectory table and usually had elegant beveled legs with a simple top. These would have been used for smaller dining tables and usually seated six, four by two. These were and still are often accompanied with chairs, benches or both together and are also made of similar wood to the Refectory table.

Due to most having one or two drawers along the longer sides, harvest tables could and often were used as office desks. They had four elegant straight legs which were separate, unlike the attached beveled legs of the Refectory and trestle table. Unlike its name, this table was more used for writing paperwork on and not for the eating of food. Yet strangely enough this table has inspired the currently popular dining table which is present in most homes.

If you are interested in giving your home an antique French country touch, any one of these three tables would be a great choice. It is not hard to find 19th century pieces around however finding anything earlier is a much harder task. If you do buy one of these tables, be assured that you will have the history of many families that have enjoyed their dinner around the very same table.