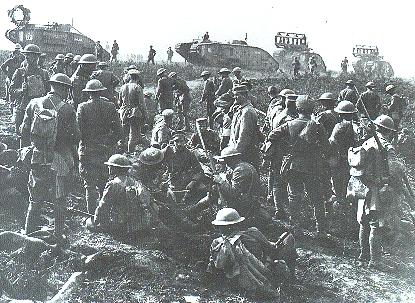 During the First World War, Canada formed field forces for overseas posting. These forces were termed the Canadian Expeditionary Force and comprised of volunteers. There were no conscripts on the Force as conscription was enforced only in January 1918, towards the end of the war. In all, Four Divisions of the Expeditionary Force fought on the frontlines during the Great War. They were absorbed into the British Army and were known as the Canadian Corps.

Most of the men serving on the Canadian Expeditionary Force were of British extraction as many men from the French-Canadian population of the Dominion of Canada would not enlist. There were recruits from various other ethnic groups in Canada. Significant contributions to the war effort were also made by Japanese-Canadians and Afro-Canadians despite systematic racism.

The Canadian Expeditionary Force distinguished itself as a heroic fighting force in the Second Battle of Ypres and the Battle of the Somme. The exceptional fighting spirit of the men was acknowledged during the Battle of Arras in April 1917. Both Allied and German military commanders were respectful of the highly skilled Expeditionary Force from Canada who lost only 9.28% of their men who had enlisted during the entire course of the war.

The Canadian Expeditionary Force was an overseas fighting force of mostly volunteer servicemen of British extraction from Canada. They served heroically during the First World War to be honored as an exceptional fighting force, distinguishing themselves in key battles in France.