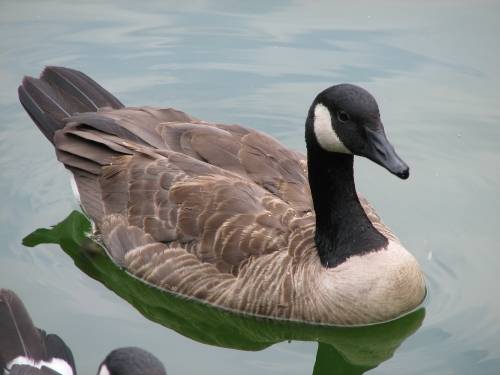 Want to learn more about Canada goose facts? Read on for facts and information on Canadian geese migration & habitats…

The Canada goose has a basic black color on the head and neck, a neat white chinstrap, and light tan to cream color variation on the breast with a brown back. The population of the Canada goose has increased dramatically in urban and suburban areas in recent years.
An interesting fact about the Canada goose is that just a decade or two after people intentionally re-introduced the very large Canada goose to various areas they were soon considered pests.

Migratory Behavior of the Canada Goose

An interesting fact about the Canada geese is that the migratory populations are no longer going as far to the south during the winter months as they used to previously. This shift in northward migration has been accredited to the changes in farming practices which makes grain more available during fall and winter, combined with changes in the weather and hunting patterns.

Canada geese from most populations migrate towards the north after breeding. However those geese that do not breed or have lost their nest early in the breeding season move about 1500 km northward. They try to use the vegetation to facilitate their molt, and even local populations which normally do not migrate south in winter shift to the north by late summer to molt.

The giant Canada goose almost became extinct in the 1900s and has been reintroduced to the local landscape however the excess number of these geese has led to their classification as pests. An interesting fact about the Canada goose is that they mate for life and both genders are known to choose their mate of similar sizes.

Natural Habitat of the Canada Goose

The Canada goose prefers marshes and areas near grass and grain fields and areas located near water. They like to work on grass because it is easy to feed their young on the flat land and keep an eye out for predators. This is why the Canada goose is commonly found in areas inhabited by humans like the golf course, airport, grass lawns and parks
Feeding Habits of the Canada Goose

Canada goose is known for its preference of plants and indulges in feeding on grass, skunk cabbage leaf, eelgrass and sedges during spring and summer. However during fall and winters they prefer the abundantly available blueberries, agricultural grains and seeds. It is an interesting fact about Canadian geese that the two subspecies have beautifully adapted to their environment that they survive in.

Nesting Facts about the Canada Goose

The clutch size is 2 – 8 eggs which are 3.3 inches in length and 8.3 cm in width. The incubation period is 25 to 28 days and nestling time is 45 to 50 days. The creamy white egg cracks open to reveal hatchlings which have yellowish down and open eyes.