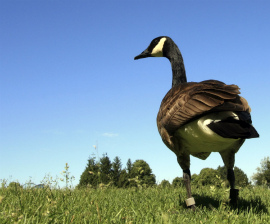 Are Canadian Geese over-running your property? There are quite a few ways to get rid of them. Read on for more information on Canadian Geese removal…

There are professional services you can call for Canadian Geese removal, including your area’s animal control authority (in some states), but this article will focus on things you can do yourself to remove these animals cleanly and effectively.

No one wants a bunch of goose droppings all over their yard. And no one wants to have pets, kids, or themselves being bit by a wild goose, so what can you do to get rid of these fowl creatures? There are actually quite a few options.

Okay, so maybe you don’t solve an animal problem by getting another animal. That’s understandable, but for those of you who like dogs, let me explain. Border Collies love to chase things. They chase sheep, they chase bikes, they chase…birds. Now, they never kill anything when they catch it; they just like to run after it. Some breeds of dogs aren’t like this. They go for the kill. A Border Collie will wreak havoc on the nerves of the geese invading your property without every attacking them. The birds, however, don’t know that the dog won’t attack and so they treat it as a normal predator and flee. Problem solved. You’ll have those geese fluttering off in no time as they wonder, who let the dogs out? (Now you just have to make sure you don’t run out of dog food!)

No, I’m not talking about a monster movie costume. I’m talking about realistic decoys. They’re great for Canadian Geese removal. You can buy wolf or coyote statues that will scare geese away. Placing a couple of dead geese effigies around your yard will also do the trick. (I know; that sounds a little grisly, doesn’t it? But it works.) Live geese see the fake predators or fake dead geese and assume that they’re real and that your place is not a safe area for geese to live. If you want to really make your decoys life-like, you can add a sound box that plays predator growls every few minutes. The geese will be so spooked, they’ll leave your property immediately, even if they suspect your statues aren’t real. Some people use the sound boxes without the statue and get the same results!

Flavoring is usually added to something to make it taste better. But in this case, you’re adding flavouring to your grass to make it taste worse! Do you like grape-flavored soda, gum, or candy? Canadian Geese hate it! That’s why many manufacturers produce a chemical repellent for your lawn that uses some of the same key ingredients as grape flavoring. Just spray it on your grass and you’ll be on your way to a successful Canadian Geese removal campaign in no time. Since the geese eat grass, they’ll fly to somewhere that doesn’t taste like grape!