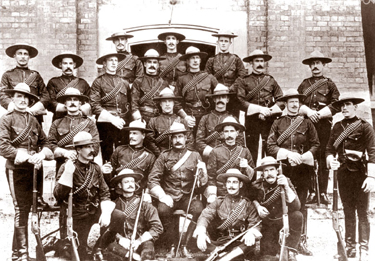 The Canadian mounted rifle is the title given to the Fifth Battalion which was essentially a mounted infantry unit part of the Canadian Expeditionary Force created in World War I. This force comprised of volunteers from the seventh and 11th Canadian Hussars who hailed from the Eastern towns of Québec.

Origin and History of the Canadian Mounted Rifles

This infantry was set up in 1915 and was then transferred to England later in that year. By 1916 this unit was transformed to an infantry battalion and made part of the Eighth Canadian Infantry brigade as well as the Third Canadian Division and the C.E.F which was later renamed as the Canadian Corps. These Fifth Battalion Canada mounted rifles were involved in combat and war action in Flanders and France during the years of 1916-1918.

From the year 1929 to 1931 much after the Great War had come to an end, Canada awarded honors to all the units that were involved in the most important battles and campaigns during the World War. Of course the fifth Canadian mounted rifles was conferred with many awards for their performance and bravery during the Great War.

Some of their battles included the 1916 skirmishes at Mont Sorrel, Somme and Flers-Courcelette along with Ancre Heights, for 1915-1918 France and Flanders. In 1917 Arras, Vimy, Hill, Ypres and Passchendaele followed by Amiens, Scarpe, Hindenburg Line and Canal du Nord in 1918 along with the Sambre and Valenciennes.

In fact in the battle of Passchendale the Fifth Canadian Mounted Rifles lost 60% of its strength in one day of battle. Two of the members of this unit were awarded the highest honor bravery from the British Empire which is the Victoria Cross. The individuals who received the Victoria Cross were Charles Smith VC and George Randolph Pearkes VC.

The Fifth Battalion Canada Mounted Rifles Association was established in the year 1934. This association used to meet annually from 1934 but was later disbanded in the year 1969. The Canada Mounted Rifles Association held their first reunion at the Chateau Frontenac Hotel on September 29 on the year of its inception. The members included 32 former soldiers out of which 13 were from the original 11th Battalion & signed the attendance register.

The President of the Association was very particular about keeping the records of the meetings and these records of the association and its meetings are still available at the Bishop University Library, Lennoxville, Québec at the Eastern Townships Research Center in this facility.