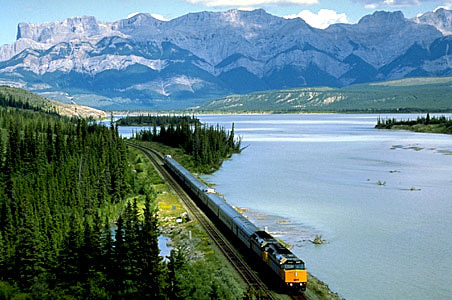 Travelling by railway is the best way to see a country and what more beautiful country to see by train than Canada. The vistas and the great variation in landscape from the east to the west are breathtaking. You can start off with the excellent beaches and rugged rocky coastline of the Atlantic in the east. Then as you progress westward you have the great wide plains of the farm country and the thick forests, mountain ranges, the Great lakes, rivers, and swamps until you end up in British Columbia where you have great mountains, valleys, and a rugged coastline all over again. If you go north, there is the very unique landscape of the tundra and the Arctic north.

Via Rails run a sightseeing tour of Canada from Toronto in the East to Vancouver on the Pacific Coast. The tour takes nearly a fortnight and the emphasis is on sightseeing. The trains are all first-class sleeping accommodation and meals are served on board. You start with a dinner at le Grand Café in Montreal, spend three days at the Inter Continental in Toronto, enjoy four days of sightseeing in the Rockies where you visit Jasper, Banff, and the Bridal Veil Falls among other places, and end with two nights at the Hyatt Regency in Vancouver.

Rocky Mountaineer run a six-day tour from Calgary to Vancouver as well as the other way round. Hotel accommodation is provided and you get to visit Banff and Lake Louise. Helicopter tours of the lake and to the summit in Calgary are included.

Quebec to the Maritimes

This nearly week-long tour starts with a tour of the capital of the French-speaking province of Quebec, Montreal. You get to see the Basilica of Notre Dame, St. Joseph’s Oratory, and other landmarks. The next few days journey takes you to the old British garrison town of Halifax in the Maritimes on the Atlantic coast.

If you can get to Canada at the end of October and beginning of November, you can go north to meet the migrating polar bears at the only human settlement in the world where you can see these bears up close and personal. The bears migrate over the frozen Hudson Bay to the ice pack and they pass through Churchill, Manitoba during these few weeks. You have to take the plane to Winnipeg from where you can enjoy the frozen scenery on the way to Churchill. The Tundra Buggy lets you view the bears from close range. There is also dog-sledding to enjoy on the way back.

There are a lot of other short and long tours that might fit into your itinerary. You can check with your travel agent and I can promise you won’t be disappointed if you take your time and see this wonderful country by rail.