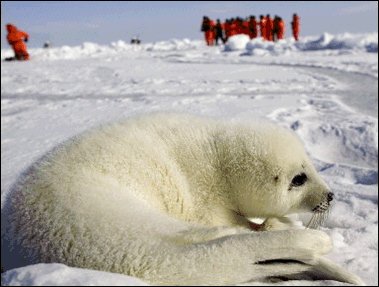 Looking for Canadian seal hunt info? Want to know about all the different types of seals available for hunting? Read our guide for more information on choosing the right hunt for you…

Canada accounts for the most seal hunts in the world. Seals from Canada are sold mainly to Norway. The Canadian seal hunt concentrates on the hunting of the harp seal, which is a species of seal without ears. In Canada, these seals are abundant off the coast of Newfoundland and Labrador.

The commercial Canadian seal hunt occurs from November 15 to May 15 every year. The seal hunting season sees the majority of seal hunts happening in the Gulf of St Lawrence in late March and during the first two weeks in April in an area called ‘The Front’ in Newfoundland. The peak window period of a few brief weeks is generally termed as the Canadian seal hunt.

The Government of Canada monitors the Canadian seal hunt and focuses mainly on the Gulf of St Lawrence. The natural predators of harp seals are polar bears, sharks and whales called Orcas. However, humans remain the seal’s primary predator. In more recent years, seal hunting was done to contain the seals’ impact on commercial fishing as the seals fed on local fish such as cod.

The Canadian seal hunt also features the hunting of hooded seals and grey seals although harp seals account for the greatest number of kills. 70% of Canadian seals are killed on ‘The Front’. Harp seal pups, commonly known as whitecoats, are banned from being hunted. A seal is considered a pup from birth up to age two weeks.

The Inuit people of Canada have been hunting seals for over 4,000 years primarily for their meat, which provided a rich source of Vitamin A, protein and iron. Seal pelts provided excellent warmth from the freezing cold of the northern regions. Seals hunted by the Inuit account for only 3% of the total population of seals hunted as part of the Canadian seal hunt. Seals are a staple food for the Inuit and they provide the fat necessary for fuel for lamps and fur for boots and garments.

The Canadian seal hunt focuses on the commercial hunting of seals mainly in the Gulf of St Lawrence and off the coast of Newfoundland. Harp seals are hunted for their meat and fur and also to mitigate their effects on the local fish population.