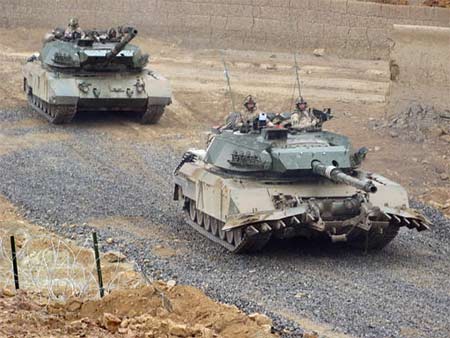 Do you want to learn about the tanks used by the Canadian Army? Are you interested in learning about the different styles of Canadian tanks? Read our guide for more facts and information…

The Coyote is a style of tank employed by the Canadian military. The Coyote is a highly mobile tank that is also well armed and provides excellent protection to its occupants. The style of tank is considered a variant of the light armored vehicle that is focused on reconnaissance. The Coyote tank is constructed of ballistic steel hall which protects against small arms fire, mines and high explosive air blasts. The tank can also be outfitted with add on armor to protect against large projectiles.

The tank has a two man electric turret drive and is equipped with a fully stabilized 25mm chain gun. The tank is also capable of reaching a maximum speed of 100km/h. The Coyote is used by the Canadian military in battlefield reconnaissance and light surveillance. The surveillance system of this tank is a combination of radar and electro optic sensors.  The tank is also outfitted to perform surveillance in any weather and during the day and the night. The Coyote tank is capable of detecting enemy forces through a combination of a day camera, radar, thermal energy and laser range finding equipment. The Coyote is designed to operate in hot climates around the world. The Coyote is currently in use with the Canadian army’s six mechanized infantry battalions, three armor regiments and some schools.

The Leopard 2A6M was developed in Germany in the 1970s and first introduced to the field in 1979. The Leopard 2A6M has undergone some slight alterations to become the tank that is used by the Canadian military today. The tank is equipped with a longer main gun and also now has an increased protection against mines. The Leopard 2A6M deploys a crew of four and can engage targets in both the day and the night. The Leopard 2A6M is also an excellent tank for the field as is it requires minimum maintenance as the engine and transmission can be completely replaced in 30 minutes.

The Canadian Army ordered 1143 M113A3 tanks and they are anticipated to be in service until 2020. The tank serves as a mechanized support vehicle and an infantry section carrier. The goal of this tank is to provide the army with combat support services. The M113A3 are being upgraded to increase their capacity and mobility and additional armor can be installed to provide more protection.