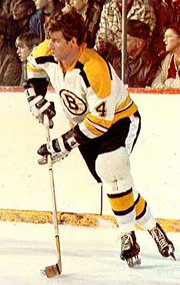 The most popular sport in Canada is ice hockey and most of the great Canadian male athletes have been hockey players. Track and field has also yielded fame and a little infamy to Canada. Having a lot of snow during the winters has helped develop some fine skaters and skiers as well.

The greatest ice hockey players of all time have been Canadian. Wayne Gretzky was born in Brantford, Ontario in 1961 and from a young age, he was always well ahead of any competitors in his age group. Growing up to be six feet tall gave him the height to play his favorite game but it was not strength or speed (both of which he did not have much of) that gave him an edge over his rivals but a great intellect and an awareness of the tactical situation in the ice rink.

Gretzky practically owned the area behind the net and was always in the right place at the right time. A twenty year long National hockey League (NHL) career netted him 894 goals and 1963 assists. This shows his unselfishness and he was also a true sportsman on and off the field.

Robert Gordon “Bobby” Orr was born in Parry Sound, Ontario in 1948. He was a great defenceman who had an uncanny ability to change tack and score goals and assists as well. In fact, he still holds the record for most goals and assists in a season by a defenceman. This end-to-end game revolutionized ice hockey and defencemen were never the same again.

Gordon “Gordie” Howe was born in 1928 and competed on the professional level from the 1940s to the 1980s. Unlike Gretzky, Howe had the muscle and the strength to go with his height. He had the scoring skills and scored 801 NHL goals and 1049 assists.

Jacques Villeneuve won the 1997 Formula One World Championship with the Williams F1 team after winning the 1995 CART and Indy titles in the US. He is the only Canadian to win either a Formula One Championship or an Indy Racing League Championship. His uncle, also named Jacques, and father Giles were famous racing car drivers in their time also.

Lionel Pretoria Conacher was one of the great athletes from the early twentieth century who was not only proficient in team sports such as ice hockey, lacrosse, Canadian football, and baseball but also contact sports such as boxing and wrestling. His huge six foot two inch frame earned him the nickname “The Big Train”.

Ben Johnson set the 100 meter world sprint record at the 1987 World Championships and broke his own mark at the 1988 Olympics. However, the gold medal was taken from him after he was accused and found guilty of using illegal drugs to enhance his performance. It was left to Donovan Bailey to erase this shame by winning the gold for the same race at the 1996 Olympics and hold the world record for a while.