When most people think of fishing in Alberta, Canada, the first thing that comes to mind is the gem of the Rockies, Lake Louise. This spectacular body of water certainly has many attractions, but it is off-limits to fishermen as are all lakes in Banff National Park. 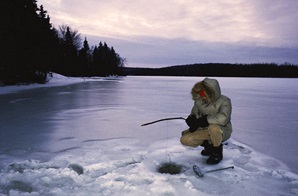 That’s okay because the original name for Lake Louise was Ho-Run-Num-Nay meaning Lake of Little Fishes. Small Cutthroat Trout, Bull Trout and Mountain Whitefish survive the year round in the lake, but better specimens are awaiting the avid angler in nearby streams and lakes.

Ice Fishing enthusiasts often head out during the brutally cold Alberta winter to try their luck on the Spray Lakes Reservoir near Banff. There they are bound to reel in one of several species found in the reservoir. The three species of fish that you are most likely to catch in the winter are

– Lake Trout. The largest trout found in Spray Lakes Reservoir averages four pounds, but can weigh over 50 pounds. They love deep cold water and are the most likely prize that you will pull up on your ice fishing adventure.

– Lake Whitefish. These fish average one or two pounds, but can weigh as much as 10 or 11. They have very small mouths and feed along the bottom of deep, cold lakes. Their flaky white meat tastes very fine.

– Rainbow Trout. A fisherman has a very good chance of hooking one of these beautiful sport fish beneath the ice of the frozen Spray Lake Reservoir. They average one to two pounds, but can get up to 20 pounds.

Two other fish also abound in the lake, but are less active in the winter.

However, you may still find one these on your hook:

– Brook Trout. These fish, also called Speckled Trout, grow to an average length of 10-12 inches and weigh from one-half to one-and-a-half pounds. The biggest fish of this type caught in Alberta weighed nearly 11 pounds. They’ll bite on small spoons or on most artificial flies designed for trout. Because of their fighting spirit and excellent table quality, they are the most popular game fish in Alberta.

– Brown Trout. These European natives average around one to two pounds but a 17 pounder was once caught in Alberta waters They will take live bait or artificial flies. Since they are naturally cautious, it takes a skillful angler to convince them to take the bait.

Now you know what you are after, all you have to do is catch it. There are special techniques for catching fish under the ice. Here are some tips.

– Hire a guide. Unless you are a veteran ice fisherman, you will do well to hire a fishing service or a guide to set things up for you. Ice fishing can be dangerous if you choose the wrong spot to set up your hut. A professional will know where the ice is safe and where the fish are biting.

– Be quiet. Trout are keenly aware of sonar and of any other sounds you may make from up above. Set up your cooler and tackle so that you can conveniently reach everything without making too much noise. Even the sound of your bait bucket scraping beside the hole will be enough to alert the fish that something is wrong.

– Use the right bait. Trout love live nymphs and crappie minnows. They are attracted to the movement that active bait provides. Maggots, waxworms, and redworms also attract trout, but they die quickly and have to be changed frequently. That means more movement above the ice that might spook the fish.

– Use a bobber. Although trout spend most of their time in cold, deep waters, they will suspend around six feet below the ice to feed early and late in the day.

– Use camouflaged equipment. Don’t choose trebles or lines that will contrast with the ice. A smoke or grey one-to-four-pound monofilament should blend in with the ice overhead. Use silver #12 or #14 trebles or #12 to #8 single hooks. Balsam or cork bobbers will attract the least attention.

– Cover your scent. Trout have an excellent sense of smell and can detect that you are above the ice by the odor you leave on line and lure. Fool them by smearing a commercial salmon-oil scent on everything that you drop through the ice.

There are many tricks to being a great ice fisherman, but once you learn them, your Alberta adventure should turn into a rewarding, memorable experience. Be safe and have fun.