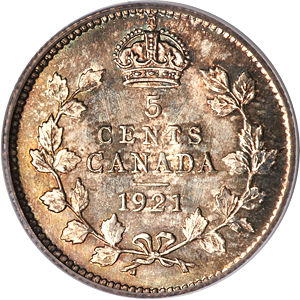 Are you interested in collecting old Canadian coins? Do you want to know the Canadian coins that marked Canada’s history? Do you wonder which Canadian coin is considered highly rare today? Read our guide for more facts and information…

After World War Two many countries around the world issued currency to commemorate the end of one of the most horrible periods in history, and Canada was no different. The Victory Nickel is a Canadian coin that was originally issued between 1943 and 1945. The face of the old five cent piece was designed by Canadian Mint master engraver Thomas Shingles. The design featured a V and a flaming torch. The V in the centre of the coin has a double meaning as it represents Winston Churchill’s victory symbol as well as the Roman numeral 5, which is indicative of the worth of the coin. The flaming torch in the centre of the design represents sacrifice commemorating the lives lost in World War Two. The original nickel was twelve sided and the edges are designed to read in Morse code the motto of ‘we win when we work willingly’. In 2005 the Royal Canadian Mint reissued a commemorative Victory Nickel to celebrate the 60th anniversary of the end of the war.

The Voyageur dollar is an old Canadian coin that is the precursor to the modern day loonie. The Voyageur was struck for circulation from 1935 to 1966 and was designed originally to celebrate the silver jubilee of King George the Fifth. The design of this old coin features a portrait of the King on one side and an image of a canoe and a voyageur on the reverse. In the canoe, it can also be noted that there are two bundles engraved with the initials HB, standing for the Hudson’s Bay company. The design of the Voyageur dollar was supposed to be continued on the modern day loonie; however, the design was lost and fears of counterfeiting led to a change in the design. The Voyageur dollar never had strong circulation as it competed with the dollar bill; with the elimination of the dollar bill the loonie is a much improved coin.

The Centennial Quarter was designed to celebrate confederation and the conferences that led to the initial unification of Canada. The design of the coin is intended to recall the important conferences held in Charlottetown and Quebec. The design was chosen through a national competition and the winner was Dinko Vodanovic. Dinko’s design features the four emblems of the primary European nations involved in the founding of Canada. The emblems featured are those belonging to Ireland, France, Scotland and England. During the time that the Centennial quarter was minted more than seven million coins were produced.

The design of the 1921 nickel is not what makes this old coin rare; rather it is the limited amount of five cent pieces from the year that still exist. The design of the 1921 nickel features King George the 5th. The reason that these coins are rare is that in 1921 the mixture used to produce nickels was changed in order to help with the metal shortage. As a result of the shortage, most of the coins that had already been produced were melted down; the few coins from 1921 that remain are now considered by collectors to be rare.