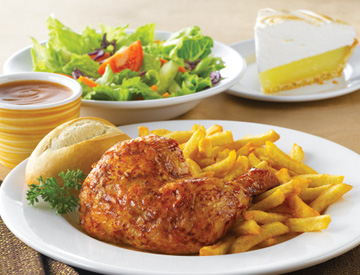 Want to learn more about Swiss Chalet Canada? Read on for facts and info about this interesting restaurant…

Swiss Chalet opened the first of their slow-rotisserie style restaurants in Toronto in 1954. The first store was located at the corner of Bedford Road and Bloor Street. Rotisserie Chicken was the only menu entrée. This was served with a side order of french fries in a Swiss-style dining room with exposed beams such as you find in a Swiss mountain chalet, hence the name of the original restaurant. This store remained open for business until 2006 when it had to be closed due to the construction of a condominium in the neighborhood.

The Rotisserie Chicken was a huge hit and became popular with both locals and tourists from the United States. Swiss Chalet started home deliveries in 1961 and five more restaurants were opened across Ontario in the 1960s plus a location across the border in Buffalo, New York. The company expanded further in the 1970s to more than forty restaurants across the country and in New York.

Foodcorp, the parent company of Swiss Chalet and what had become their sister concern Harvey’s, was acquired by Cara operations in 1977. Swiss Chalet and Harvey’s are often situated close to each other, sometimes in adjacent lots. These days, you can find more than 190 Swiss Chalet locations all across Canada and in the United States. The only places in Canada you cannot find a Swiss Chalet are Quebec and Saskatchewan. You can even find Swiss chalet branded items on the menu aboard Air Canada flights.

Swiss Chalet started an online ordering system in 2003 allowing their customers in many locations across Canada to place takeout or delivery orders over the internet. In 2005, due to the raging notoriety and bad reputation surrounding trans fats, the company started using an oil low in both trans and saturated fats.

The success of the original dish and its abiding popularity is credited to the discovery in the 1950s by Swiss Chalet founder Rick Mauran of a secret Swiss recipe. This allowed the chicken which was slow roasted in an open-flame oven to remain extra juicy and tender on the inside while getting crisped brown on the outside.

The chicken has also been traditionally served with Chalet Sauce which is a dipping sauce similar to barbecue dripping gravy. This dip has proven so popular that it is available as a sauce, gravy, and marinade in supermarkets across the country.