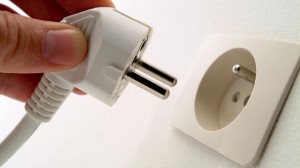 Are you going on vacation to France? Do you want to know what electricity voltage is used in France? Here we give you useful facts & information on how to use your electrical appliances in France.

Mainland France and Monaco both operate on 220 Volts and 50Hz on AC. The electricity system in Andorra is slightly different, operating on a combination of 220 Volts and 125 Volts, both at 50Hz.

The US and Canada both operate on 120 Volts and a supply of 60Hz which means is you intend on taking any electrical appliances with you on vacation to France you’ll need to buy some continental electricity adaptors.

There are generally two different types of electrical adapter for France. The large heavier adapters are actually only designed to work for electrical appliances that operate at 35 watts or less. This includes small devices such as radios and shavers.

There are two types of electrical sockets used in France. Many older buildings in France operate with electric wall sockets that only have two prongs. All newer buildings have three fat prongs including a protruding earth prong; that means there are two holes in which you plug your device, but the actual wall socket has a prong sticking out that is supposed to slot into the plug head of your device. If you didn’t buy your device in France you won’t even be able to stick it in the wall unless you have a special adapter.