Trench warfare was a prominent part of World War One as trenches were erected on both the Eastern and Western Fronts. Canadian soldiers, like others who fought in World War1 experienced the horrors not only of war but also the horror that was life in the trenches. Trench warfare pushed much of the fighting of World War One into a stalemate; this created situations where many soldiers spent the course of the war surviving not only enemy fire but also the trenches. 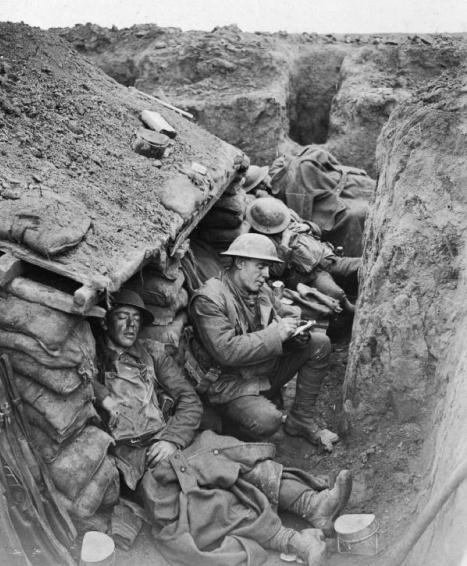 The design of a trench was sound in theory, especially as it was believed that the war would only last a few months at most. When the true struggle of World War One set in, the design of the trenches was not changed which led to many struggles for the soldiers living in them throughout the year. The trenches constructed by the Allies and Canadian soldiers were about 1 metre in width and two metres deep.

The trenches were also constructed in a zigzag pattern with the belief that this offered better protection from enemy fire. The trenches were designed to withstand machine gun fire, artillery attacks as well as explosive shells. For the Canadian soldiers who found themselves in the trenches a common technique of fighting was over the top.

This technique led thousands of men to their death as the soldiers would climb out of the trenches and run into enemy fire in the hope of reaching and securing the enemy’s trench. The over the top style of fighting was the most common in trench warfare; however, the Canadian army also occasionally fought at night which frequently led to hand to hand combat in No Man’s Land or the area separating the two opposing trenches.

Difficulties in the Trenches

Canadian soldiers who served in the trenches knew that the greatest danger was always enemy fire; however, enemy attack was not the only bringer of death in World War One. The trenches frequently were cold and wet especially during periods of poor weather.

Trench foot was a common aliment and the treatment was frequently amputation; in addition, other small wounds quickly became dangerously infected in the trench. Canadian soldiers faced not only danger due to injury but also poor living conditions. It was common for soldiers to go weeks without a bath during their stay in the trenches and the smells of human waste, decaying bodies, and garbage were all too common. The trench was not only home to battling soldiers but also to insects, rats, and lice that only added to the misery of war.

In the Mind of a Soldier

Physically life in the trenches during World War One was terrible but the psychological effects were also enormous. The trenches of the Great War were a realm of life and death were the constant fear of not returning home was fuelled. The fighting between the two sides was often at a stalemate; however, soldiers continued to die and were often left where they fell. The fear that was only enhanced by hearing the sounds of the opposing trench was attempted to be quelled in the soldiers as they spent time writing letters, sleeping, eating and frequently playing cards. For many soldiers spending a great length of time amongst the despair of trench warfare made it difficult to remember the purpose and motivation for continuing the fight.