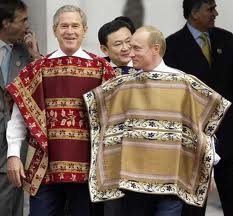 A festive mood sets the overall tone for traditional Chilean clothing. The Chileans can be found sporting a host of interesting clothing apparels such as coats, ponchos and pants. As such the Chileans are regarded as being extremely particular with their dress sense.

This is a highly decorative traditional Chilean garment. Developed in Central Chile the Chamanto is in many ways quite like the poncho. The garment is woven in both wool and silk. One of the things that lend character to the Chamanto is the ribbon edging which is continued throughout the garment. However the thing that sets the Chamanto apart from conventional ponchos is the fact that they are reversible. This means they can be worn either side. In general one side is prepared with a dark color whereas the other side has a lighter shade. This gives the wearer versatility. According to tradition the dark side is sported during daytime whereas the lighter side is worn at night.

The Chamanto is quite a difficult garment to produce. This is because it involves exquisite weaving skills for wool and silk along with which it has an intricate design based on crossed threading. The Chamanto is often adorned with various prints including the national flower, barley, wheat ears, bunches of grapes, pansies, fuchsias and birds.

This is yet another traditional Chilean clothing accessory. The Chupallas is a typical horseman’s hat made out of straw. It is common to see general people sporting the Chupallas in rural areas. The Chupallas can also be seen sported by those dancing the cueca, a Chilean folk dance. But naturally it is a common feature of Chilean rodeos as well.

The hat gets its unusual name from the plant which was initially used to make the chupallas. However today they are made using many different building materials including wheat and rice.

You will find the Chileans to be dressed in formal attire most of the time. However they do not compromise on comfort for the sake of fashion. They wear the ideal garments and materials according to the season.

There are a number of other high fashion garments of Chile. The cape is one which is not something found in ever culture. Then you have safari jackets which are also a popular tradition. Togas and robes are also to be found in the traditional Chilean clothing closet. The most commonly used materials include cotton, wool, linen, denim, tartans, viscose and polyester.

USA
Interested in the American eagle outfitters logo? Find out about the patriotic logo of

USA
Looking for Blackfoot Indian clothing? Want to know about all the different styles of