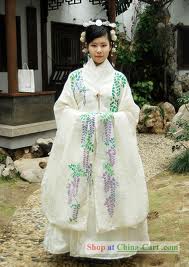 Interested in ancient Chinese clothing? Find out about the changing trends of Chinese clothes through time in our information guide.

Chinese clothing is one of the most unique elements of the mysterious Chinese culture. A peak into the history of Chinese clothing reveals the tunic to be the most popular type of garment worn by the public. This was a long T-shirt like garment that flourished in many different variations through the changing times.

Chinese women could traditionally be seen wearing extremely long tunics. These would often extend all the way to the ground. The women would also make use of belts with their tunics. Men on the other hand sported relatively shorter tunics which would end at about the knees.

The Chinese would often sport a jacket with the tunic. This was specially the case in the winter season. Specially padded jackets were designed to keep warm in the chilly season. Pants would also be incorporated under the tunic during the winter season.

The kind of fabrics used by the Chinese people varied according to their social status. The bulk of the Chinese population was poor and thus could only afford to make clothes out of ramie or hemp. The small elite class of rich businessmen and nobles could be seen wearing extravagant clothes made out of silk.

In ancient China, head hair was also taken as part of the apparel. According to tradition both Chinese men and women used to keep long hair. It was actually considered to be disrespectful to get your hair cut short.

Another strange factor regarding the ancient clothing tradition of China is the use of colors. At one point in time the emperor of the Sui Dynasty actually regulated the kind of colors that should be worn by people of different social classes. The spectrum of colors was restricted to black and blue for the poor people. On the other hand the rich were allowed to wear any color they liked. This practice created unfavorable divides amongst the masses.

Foot binding is yet another unusual element of ancient Chinese clothing. This was a practice that flourished during the Sung Dynasty wherein which women would wrap their feet in tight bandages so as to purposely deform them and keep them small. Such small feet were considered to be a sign of beauty. Foot binding was thus one of the fashion trends of the time amongst women.

It was during the Mong Dynasty era that the Chinese masses were introduced to cotton as a material for making their clothes. With the Mongols the use of cotton spread amongst the masses as they destroyed many of the mulberry trees that produced silk during their invasion.

The introduction of cotton helped to eliminate the social distinction that had arisen due to the different clothing materials used by the people of different classes. Cotton was considered to be much better than ramie and hemp. It was a warm and soft cloth that looked decent and was cheap to purchase as well. Although the ancient Chinese cotton clothing was primarily for the summer season, the locals would pad them up to gear up for the winters.