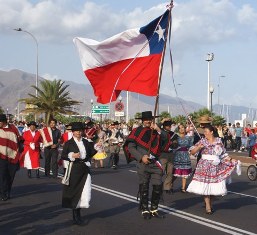 Chilean Independence Day customs kick off in spring which falls in September in Chile, it being in the southern hemisphere. The festivities start off days before the 18th of September with festivals, food, drinks, open pit BBQ called asados, baking fragrant empanadas, dances and parades increasing the tempo till the actual day of celebrations and continuing well after the big day hay of Dieciocho has been commemorated. The national anthem is played and sung with great pride from all corners of the city.

The revelry takes place in open air buildings called the Ramada’s with a dance floor gracing the centre of the courtyard and covered with a thatched roof on top. The various stall surrounding the traditional shelter style area offer fondas, refreshments and a variety of the local cuisine.

The entire country partakes in the celebration of the Day in 1810 when the Chilean criollo leaders declared limited self-government as the Napoleonic Wars raged across the Iberian Peninsula. The Dieciocho is a traditional celebration even though Independence was declared in April.

Food and wine flows during the revelry and the rodeo arenas called the Medialunas, are crowded with audiences who cheer on the huasos showing their craft inside the arena. The crowds thoroughly enjoy the traditional shows of dance, legends and costumes on display to thrill and entertain the merrymakers.

The Chilenidad spirit and homogeneity is celebrated in many forms during the Independence festivals. The regional highlights from north to south of the country are a sight to behold. Tarapaca celebrates Independence all month long and special religious ceremonies, activities for children and theatrical productions are prepared for the month long commemoration. Antofagasta is known for its kite flying competitions which color the landscape and fill the skies with competition and fun. Atacama boasts 300 cuecas in the Copiapó’s Plaza de Armas, and has cueca competitions along with rodeos. Coquimbo, the cueca is conducted by children.

The natives also fly kites in competitions and conduct religious ceremonies along with the traditional Pampilla de Coquimbo. Santiago and the surrounding areas witness the Semana Criolla comprising of arts and crafts, activities for kids, a rodeo, local folklore acts and beverages and local cuisine. In Rancagua which was home to the 1814 Battle of Rancagua there is music, song and dance to host the city’s National Rodeo Championships.

Maule has many folkloric tableaus and the local Creole games, called Juegos Tradicionales along with fine horses at the equestrian events to commemorate the Dieciocho. BíoBío, is known for the Fiesta de la Chilenidad with music, folklore tableaus, dance and cooking contests along with Creole games. La Araucanía hosts the week long Semana del Folclor which celebrates local folkloric traditions, cooking shows, art, history, music and ethnicity that is reminiscent of the Chilenidad.

Aysén has many cooking contests and local cuisine at the sporting and dancing events. No matter where in Chile you land up during the festive month of September Viva Chile! is the slogan that comes to mind for this lively and vibrant country.