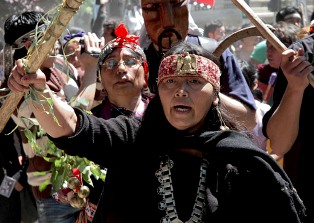 Central and Southern Chile has historically been inhabited by a tribe of Native American Indians known as the Mapuche tribe. This tribe is also to be found in Southern Argentina. The Spaniard colonists would refer to the Mapuches as Araucanians.

Although the number of Mapuche people in Chile has declined over time, they still constitute 4% of the total population of the country. Their population is concentrated in the region of Araucania.

Agriculture was the center of all economic activity for the Chilean Indians. They had a social system based on extended families with a tribal chief as their leader. Each group of mapuche tribesmen had their own leader. In times of war however they would unite under one leader. A toqui would then be democratically elected to lead the united Mapuche tribe in the war.

The Mapuche tribe is actually composed of Indians of varying ethnicity. However they share a common religious, social and economic structure. Furthermore their common linguistic heritage also binds the group together. The influence of the Mapuche tribe extends all the way from the Aconcagua River and the neighboring Chiloe island travelling all the way to the eastward region of Argentine pampa.

The Itata and Tolten River valleys were inhabited by the Mapuche, Moluche, Hulliches and Nguluche people. The Mapuche tribe rapidly expanded in the seventeenth and eighteenth century. It was during this time that Andes and pampas experienced an influx of the Mapuche people which combined them with the Pehuenche and Poyas people that were already living there.

A unique culture stemmed from this collaboration. The biggest factor that contributed to the development of this new culture was that the existing tribes namely the Patagons, northern Aonikenk, Puelche and Ranqueles adopted the Mapuche language.

Historical documents do not provide us with clear cut evidence as to the exact origins of the Mapuche tribe. Certain authorities link their language to the Penutian languages prevalent in North America. However others classify it as an Andean language. It has also been classified as an Aracucanian- Mayan language by yet some others.

A unique discovery uncovered links between the Mapuche tribe and the people of Polynesia. This supposed link was discovered when the Mapuche pre-Columbian Araucana chicken was tested for its DNA and showed that it came from Polynesia.

Furthermore the Monte Verde, which happens to be amongst the earliest of places to be inhabited in the Americas also came under the Huiliche territory. However there is no solid evidence to suggest links between the Mapuche and the people of the Monte Verde.

Despite the continuous attempts of archeologists and historians the origins of the Mapuche tribe remain unclear. Ironically those remaining of the tribe themselves do not have the slightest idea their historical origins.