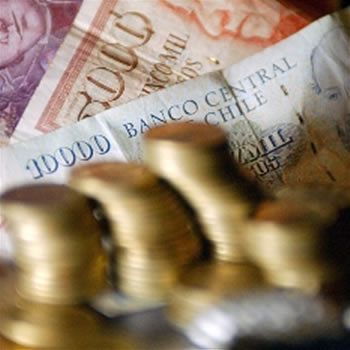 Interested in Chilean money? Read our guide for facts and info on the history of Chilean currency…

The money that circulates in Chile is known as the peso. This is the official currency of the nation. The peso which is currently in circulation dates back to 1975. However a previous version of the peso was in circulation from 1917 to 1960. A modified symbol of the dollar with a dash underneath is used to denote Chilean money.

It was back in 1817 that the first ever Chilean peso was introduced into the financial market of the country. At that point in time a peso was valued at eight Spanish colonial reales. The peso had divisions of eight reales which was maintained till 1851. The escudo was worth about two pesos.

With the introduction of copper coins in 1835 the peso became further denominated into centavos. The real and escudo denominations of the peso were taken out of circulation and production by 1851. Following this period the circulation of centavos and decimos picked up.

By 1851 the peso had gained some strength in the financial market. It was now equal to about 5 French Francs based on the silver standard. Gold coins were set to a different standard than the silver coins. The issuing of gold coins however was suspended by the year 1932 which led to a fall in the currency’s value. On January 1 1960 the peso was replaced by the escudo with the value of one escudo being equal to a thousand pesos.

The issuing of silver coins in the denominations of one fourth, half, one and two reales as well one peso continued from 1817 to 1851. Gold coins were issued in denominations of one, two, four and eight escudos. Copper coins in denominations of half and one started being issued in 1835. A new full decimal coinage was issued in 1851 and lasted up to 1853. This included coppers halves and a centavo, silver halves and a decimo along with 20 and 50 centavos. The coinage also had one peso as well as 5 and 10 peso gold coins. Later on cupro-nickel coins were introduced as a replacement to silver. The latest of Chilean coins were made using aluminum.

It was between 1840-44 that the first Chilean paper money was printed by the treasury of Province of Valdivia. Chilean banknotes were made available in 4 and 8 reale denominations. By 1870 a large number of private banks were issuing paper money. By the end of the 1800s you had all major banks issuing Chilean paper money in denominations of one, two, five, ten, twenty, fifty, hundred and five hundred pesos.

By 1881 the paper money that was being issued was redeemable with gold and silver and the production of private money was thus ended.
The peso that circulates today was issued on September 29th 1975 by decree. This replaced the escudo and had a value of one thousand escudos in total. The peso was further subdivided to form one hundred centavos.