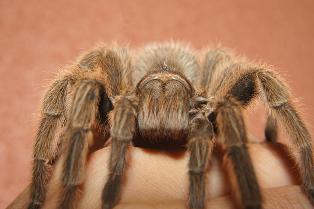 With its fascinating looks the spider has an awe inspiring appearance. At the same time it is a very quite and reserved creature requiring very little space to live a healthy and comfortable life. Ideally a tank twice the size of the spider’s leg span would suffice. These good natured spiders are easy to handle. Holding them with your hand should however be restricted as this might agitate them. Add to that the fact that they are cheap to purchase and you have all the reasons that make the Chilean rose hair tarantula a great pet.

As the name suggests these unique looking spiders are native to Chile. They particularly thrive in hot desert areas where they are found in abundance. When compared to other tarantulas the Chilean rose hair is moderately large in size. At an average the adult male can develop a leg span of about 5” by the age of four.

The tarantula has a stocky body which ranges from dark brown to black in color. However it has a coat of reddish orange to pink spiky hairs on its body. This gives them a fuzzy appearance and the hair is where they get their name from. In general the females are considered to be bulkier than the males whereas the males have a much brighter color than the females.

The spider is known as the Grammastola Rosea in the world of science. According to scientific standards it is extremely tricky to classify the Chilean rose hair tarantula. Over the years the scientific title of the spider has undergone many changes. Scientists are still debating whether different colors should be classified as different breeds or variations within one breed.

A certain group of scientists make a distinction between the Grammostola rosea and the Grammostola cala believing they are two distinct species. Others however are of a contrary opinion and differentiate the two only in terms of their color as variants of the same breed.

The menu of the spider includes a variety of scrumptious insects including the hot favorite crickets, locusts, cockroaches and grasshoppers. When kept as a pet they should be fed a maximum of twice a week. However they must be given their feed live with a chance to kill the prey themselves. They never eat a dead prey and if the spider refuses to eat then the insect should be removed from the tank.

Experts say it is best to gut feed the insects on vegetables prior to feeding them to the tarantula. For enhanced health benefits they can even be dusted with vitamins and minerals.