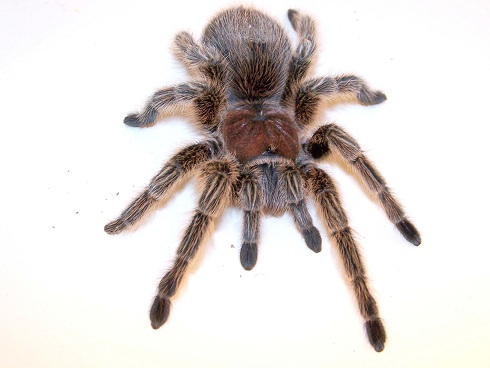 Interested in the Chilean Rose Tarantula? Read our guide for facts and info on Chilean rose tarantulas…

Known as Grammostola Rosea in the world of zoology, the Chilean tarantula is one of the most commonly available species of tarantula. Chile is home to the rose tarantula and it is from here that the pet stores across the world get their supply. The northern Atacama Dessert in Chile is where the Chilean rose tarantula lives. They are known for being able to live in the driest places on earth.

The rose tarantula calls the desert and scrub areas of Chile home. It is also found in similar regions of Bolivia and Argentina. They are generally not to be found burrowing in their native habitat. Rather they are fond of living in dry regions. The Chilean rose tarantula is a nocturnal creature which means it is generally active during the night.

The tarantula has a diverse menu including grass hoppers, crickets, moths, beetles, cockroaches and mealworms. It can also grab hold of a pinky mouse. When tarantulas are kept as pets, the best food that can be provided for them are crickets that have been gut loaded on vegetables. This is the best source of hydrated nutrition for the tarantula.

In general the Chilean rose tarantula should be fed up to two times weekly with a maximum of three food items. The tarantula is not fond of eating dead prey. It may very well reject it. If there is uneaten prey in the tarantula tank then it should be removed within a day. It is also a good idea to dust the prey with vitamin or mineral powder to ensure healthy growth and development of the tarantula.

As pets, Chilean rose tarantulas are incredibly docile and low maintenance. The fact that they are easy to keep and cheap to buy is what contributes to their popularity. They are generally kept in low-humidity terrarium which should be at the least twice the size of the spider’s leg span. The den should also offer the spider a place of hiding.

The Chilean rose does just fine at room temperature and will require about six crickets every three weeks. Although the spider has the potential to fast for weeks it has a rather erratic diet schedule. Fasting is at times indicative of an upcoming moult.

The skittish creature is fast on its feet and quick to run at the slightest sign of danger. They have a quick self defensive system and can often be seen raising their front legs to expose their fangs when confronted with danger. The small and spiky urticating hairs on the abdomen of the spider stand up when it senses danger.