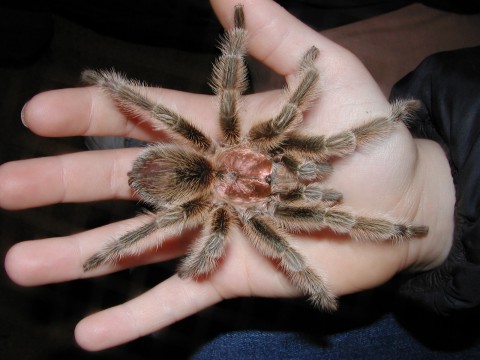 Want to learn more about the Chilean Rose? Read our guide for facts and info on Chilean Rose Tarantulas…

The Chilean rose is a large sized tarantula that has become one of the latest fads in pet owning. This fuzzy arachnid is native to the deserts of Chile and is being considered as an exotic novelty creature. Needless to say they are truly unique on top of which they are incredibly easy to take care of. This no fuss pet makes you feel special while promising not to bother you and others around you too much.

The Chilean rose is not aggressive to the least, nor is it known to bite. Furthermore the spider is quite slow on its feet which makes it all the more easy to handle. It is only when they get frightened that you will find them making quick erratic movements. One of the greatest qualities of this giant spider is the fact that it can adapt to many different environments.

When considering keeping a Chilean rose as a pet it is very important to provide for it the right habitat. Luckily that isn’t much of a problem with the Chilean Rose. This is because it will do just fine in a tank with a capacity of 5-10 gallons. It is however important to have some sort of covering over your tank in order to prevent your spider from crawling out. The shape of the tank should be such that your spider has ample amount of width to maneuver.

You should make a bedding on the bottom surface of your tank using up to two inches of peat moss, sandy sanitary soil, orchid bark or vermiculite bedding. It is also important to provide a hiding place for the tarantula within the tank. This can be achieved by placing a fish tank or even a hollow log.

In general the Chilean rose will do just fine at room temperature. Care should be taken not to let the temperature become too hot. A humidity level between 60 to 70% needs to be maintained within the tank.

In order to give your tarantula a complete home like environment you can provide it with a water dish. However you should not make it too deep so as to risk it drowning. Throwing in some pebbles into the water dish is always a good idea. The water tank is also beneficial in maintaining the desired level of humidity in the tank. You should avoid putting lighting in the tank as natural light is more than sufficient for the spider.